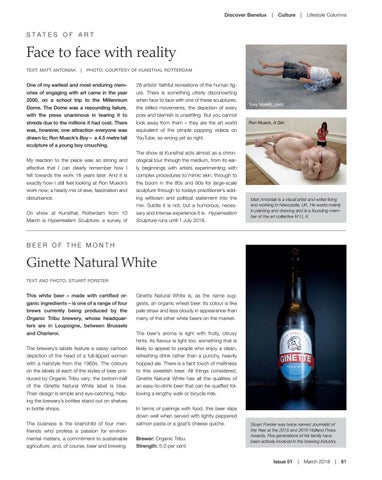 One of my earliest and most enduring memories of engaging with art came in the year 2000, on a school trip to the Millennium Dome. The Dome was a resounding failure, with the press unanimous in tearing it to shreds due to the millions it had cost. There was, however, one attraction everyone was drawn to; Ron Mueck’s Boy – a 4.5 metre tall sculpture of a young boy crouching. My reaction to the piece was so strong and affective that I can clearly remember how I felt towards the work 18 years later. And it is exactly how I still feel looking at Ron Mueck’s work now; a heady mix of awe, fascination and disturbance. On show at Kunsthal, Rotterdam from 10 March is Hyperrealism Sculpture, a survey of

28 artists’ faithful recreations of the human figure. There is something utterly disconcerting when face to face with one of these sculptures; the stilled movements, the depiction of every pore and blemish is unsettling. But you cannot look away from them – they are the art world equivalent of the pimple popping videos on YouTube, so wrong yet so right. The show at Kunsthal acts almost as a chronological tour through the medium, from its early beginnings with artists experimenting with complex procedures to mimic skin, through to the boom in the 80s and 90s for large-scale sculpture through to todays practitioner’s adding witticism and political statement into the mix. Subtle it is not, but a humorous, necessary and intense experience it is. Hyperrealism Sculpture runs until 1 July 2018.

This white beer – made with certified organic ingredients – is one of a range of four brews currently being produced by the Organic Tribu brewery, whose headquarters are in Loupoigne, between Brussels and Charleroi. The brewery’s labels feature a sassy cartoon depiction of the head of a full-lipped woman with a hairstyle from the 1960s. The colours on the labels of each of the styles of beer produced by Organic Tribu vary: the bottom-half of the Ginette Natural White label is blue. Their design is simple and eye-catching, helping the brewery’s bottles stand out on shelves in bottle shops. The business is the brainchild of four men: friends who profess a passion for environmental matters, a commitment to sustainable agriculture, and, of course, beer and brewing.

Ginette Natural White is, as the name suggests, an organic wheat beer. Its colour is like pale straw and less cloudy in appearance than many of the other white beers on the market. The beer’s aroma is light with fruity, citrusy hints. Its flavour is light too, something that is likely to appeal to people who enjoy a clean, refreshing drink rather than a punchy, heavily hopped ale. There is a faint touch of maltiness to this sweetish beer. All things considered, Ginette Natural White has all the qualities of an easy-to-drink beer that can be quaffed following a lengthy walk or bicycle ride. In terms of pairings with food, this beer slips down well when served with lightly peppered salmon pasta or a goat’s cheese quiche. Brewer: Organic Tribu Strength: 5.0 per cent