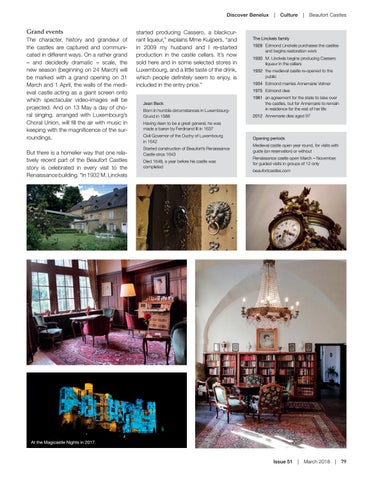 Grand events The character, history and grandeur of the castles are captured and communicated in different ways. On a rather grand – and decidedly dramatic – scale, the new season (beginning on 24 March) will be marked with a grand opening on 31 March and 1 April, the walls of the medieval castle acting as a giant screen onto which spectacular video-images will be projected. And on 13 May a day of choral singing, arranged with Luxembourg’s Choral Union, will fill the air with music in keeping with the magnificence of the surroundings. But there is a homelier way that one relatively recent part of the Beaufort Castles story is celebrated in every visit to the Renaissance building. “In 1932 M. Linckels

started producing Cassero, a blackcurrant liqueur,” explains Mme Kuijpers, “and in 2009 my husband and I re-started production in the castle cellars. It’s now sold here and in some selected stores in Luxembourg, and a little taste of the drink, which people definitely seem to enjoy, is included in the entry price.” Jean Beck Born in humble circumstances in LuxembourgGrund in 1588

The Linckels family 1928 Edmond Linckels purchases the castles and begins restoration work 1930 M. Linckels begins producing Cassero liqueur in the cellars 1932 the medieval castle re-opened to the public 1934 Edmond marries Annemarie Volmer 1975 Edmond dies 1981 an agreement for the state to take over the castles, but for Annemarie to remain in residence for the rest of her life 2012 Annemarie dies aged 97

Having risen to be a great general, he was made a baron by Ferdinand III in 1637 Civil Governor of the Duchy of Luxembourg in 1642 Started construction of Beaufort’s Renaissance Castle circa 1643 Died 1648, a year before his castle was completed

Opening periods Medieval castle open year round, for visits with guide (on reservation) or without Renaissance castle open March – November, for guided visits in groups of 12 only beaufortcastles.com