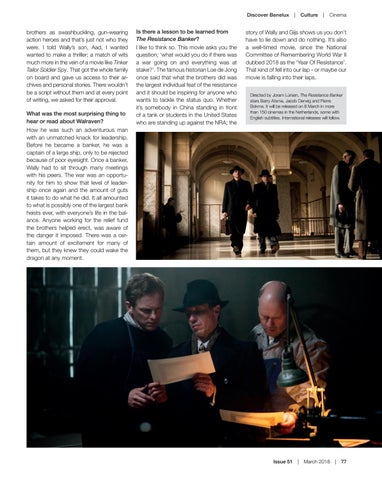 brothers as swashbuckling, gun-wearing action heroes and that’s just not who they were. I told Wally’s son, Aad, I wanted wanted to make a thriller; a match of wits much more in the vein of a movie like Tinker Tailor Soldier Spy. That got the whole family on board and gave us access to their archives and personal stories. There wouldn’t be a script without them and at every point of writing, we asked for their approval. What was the most surprising thing to hear or read about Walraven?

Is there a lesson to be learned from The Resistance Banker? I like to think so. This movie asks you the question; ‘what would you do if there was a war going on and everything was at stake?’. The famous historian Loe de Jong once said that what the brothers did was the largest individual feat of the resistance and it should be inspiring for anyone who wants to tackle the status quo. Whether it’s somebody in China standing in front of a tank or students in the United States who are standing up against the NRA; the

story of Wally and Gijs shows us you don’t have to lie down and do nothing. It’s also a well-timed movie, since the National Committee of Remembering World War II dubbed 2018 as the ‘Year Of Resistance’. That kind of fell into our lap - or maybe our movie is falling into their laps. Directed by Joram Lürsen, The Resistance Banker stars Barry Atsma, Jacob Derwig and Pierre Bokma. It will be released on 8 March in more than 150 cinemas in the Netherlands, some with English subtitles. International releases will follow.

How he was such an adventurous man with an unmatched knack for leadership. Before he became a banker, he was a captain of a large ship, only to be rejected because of poor eyesight. Once a banker, Wally had to sit through many meetings with his peers. The war was an opportunity for him to show that level of leadership once again and the amount of guts it takes to do what he did. It all amounted to what is possibly one of the largest bank heists ever, with everyone’s life in the balance. Anyone working for the relief fund the brothers helped erect, was aware of the danger it imposed. There was a certain amount of excitement for many of them, but they knew they could wake the dragon at any moment.