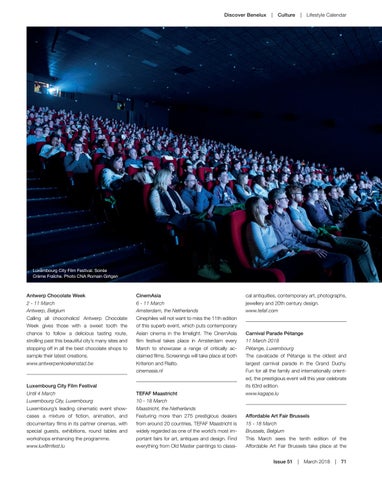 Antwerp Chocolate Week 2 - 11 March Antwerp, Belgium Calling all chocoholics! Antwerp Chocolate Week gives those with a sweet tooth the chance to follow a delicious tasting route, strolling past this beautiful city’s many sites and stopping off in all the best chocolate shops to sample their latest creations. www.antwerpenkoekenstad.be

CinemAsia 6 - 11 March Amsterdam, the Netherlands Cinephiles will not want to miss the 11th edition of this superb event, which puts contemporary Asian cinema in the limelight. The CinemAsia film festival takes place in Amsterdam every March to showcase a range of critically acclaimed films. Screenings will take place at both Kriterion and Rialto. cinemasia.nl

TEFAF Maastricht 10 - 18 March Maastricht, the Netherlands Featuring more than 275 prestigious dealers from around 20 countries, TEFAF Maastricht is widely regarded as one of the world’s most important fairs for art, antiques and design. Find everything from Old Master paintings to classi-

Carnival Parade Pétange 11 March 2018 Pétange, Luxembourg The cavalcade of Pétange is the oldest and largest carnival parade in the Grand Duchy. Fun for all the family and internationally oriented, the prestigious event will this year celebrate its 63rd edition. www.kagepe.lu