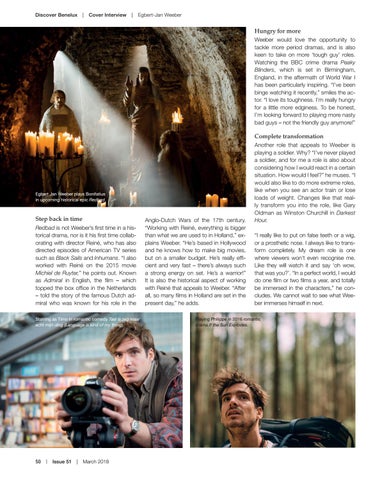 Hungry for more Weeber would love the opportunity to tackle more period dramas, and is also keen to take on more ‘tough guy’ roles. Watching the BBC crime drama Peaky Blinders, which is set in Birmingham, England, in the aftermath of World War I has been particularly inspiring. “I’ve been binge watching it recently,” smiles the actor. “I love its toughness. I’m really hungry for a little more edginess. To be honest, I’m looking forward to playing more nasty bad guys – not the friendly guy anymore!”

Step back in time Redbad is not Weeber’s first time in a historical drama, nor is it his first time collaborating with director Reiné, who has also directed episodes of American TV series such as Black Sails and Inhumans. “I also worked with Reiné on the 2015 movie Michiel de Ruyter,” he points out. Known as Admiral in English, the film – which topped the box office in the Netherlands – told the story of the famous Dutch admiral who was known for his role in the Starring as Timo in romantic comedy Taal is zeg maar echt mijn ding (Language is kind of my thing).

Anglo-Dutch Wars of the 17th century. “Working with Reiné, everything is bigger than what we are used to in Holland,” explains Weeber. “He’s based in Hollywood and he knows how to make big movies, but on a smaller budget. He’s really efficient and very fast – there’s always such a strong energy on set. He’s a warrior!” It is also the historical aspect of working with Reiné that appeals to Weeber. “After all, so many films in Holland are set in the present day,” he adds.

Another role that appeals to Weeber is playing a soldier. Why? “I’ve never played a soldier, and for me a role is also about considering how I would react in a certain situation. How would I feel?” he muses. “I would also like to do more extreme roles, like when you see an actor train or lose loads of weight. Changes like that really transform you into the role, like Gary Oldman as Winston Churchill in Darkest Hour. “I really like to put on false teeth or a wig, or a prosthetic nose. I always like to transform completely. My dream role is one where viewers won’t even recognise me. Like they will watch it and say ‘oh wow, that was you?’. “In a perfect world, I would do one film or two films a year, and totally be immersed in the characters,” he concludes. We cannot wait to see what Weeber immerses himself in next.

Playing Philippe in 2016 romantic drama If the Sun Explodes.