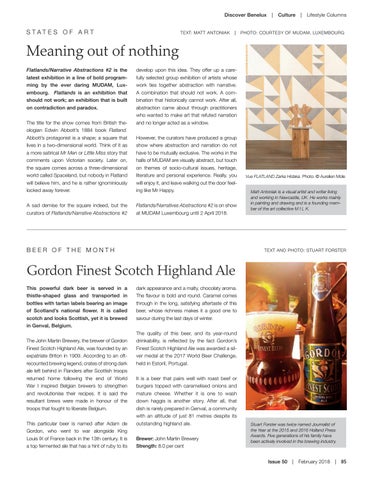 Meaning out of nothing Flatlands/Narrative Abstractions #2 is the latest exhibition in a line of bold programming by the ever daring MUDAM, Luxembourg. Flatlands is an exhibition that should not work; an exhibition that is built on contradiction and paradox. The title for the show comes from British theologian Edwin Abbott’s 1884 book Flatland. Abbott’s protagonist is a shape; a square that lives in a two-dimensional world. Think of it as a more satirical Mr Men or Little Miss story that comments upon Victorian society. Later on, the square comes across a three-dimensional world called Spaceland, but nobody in Flatland will believe him, and he is rather ignominiously locked away forever. A sad demise for the square indeed, but the curators of Flatlands/Narrative Abstractions #2

develop upon this idea. They offer up a carefully selected group exhibition of artists whose work ties together abstraction with narrative. A combination that should not work. A combination that historically cannot work. After all, abstraction came about through practitioners who wanted to make art that refuted narration and no longer acted as a window. However, the curators have produced a group show where abstraction and narration do not have to be mutually exclusive. The works in the halls of MUDAM are visually abstract, but touch on themes of socio-cultural issues, heritage, literature and personal experience. Really, you will enjoy it, and leave walking out the door feeling like Mr Happy. Flatlands/Narratives Abstractions #2 is on show at MUDAM Luxembourg until 2 April 2018.

Vue FLATLAND Zarka Hidaka. Photo: © Aurelien Mole Matt Antoniak is a visual artist and writer living and working in Newcastle, UK. He works mainly in painting and drawing and is a founding member of the art collective M I L K.

Gordon Finest Scotch Highland Ale This powerful dark beer is served in a thistle-shaped glass and transported in bottles with tartan labels bearing an image of Scotland’s national flower. It is called scotch and looks Scottish, yet it is brewed in Genval, Belgium. The John Martin Brewery, the brewer of Gordon Finest Scotch Highland Ale, was founded by an expatriate Briton in 1909. According to an oftrecounted brewing legend, crates of strong dark ale left behind in Flanders after Scottish troops returned home following the end of World War I inspired Belgian brewers to strengthen and revolutionise their recipes. It is said the resultant brews were made in honour of the troops that fought to liberate Belgium. This particular beer is named after Adam de Gordon, who went to war alongside King Louis IX of France back in the 13th century. It is a top fermented ale that has a hint of ruby to its

dark appearance and a malty, chocolaty aroma. The flavour is bold and round. Caramel comes through in the long, satisfying aftertaste of this beer, whose richness makes it a good one to savour during the last days of winter. The quality of this beer, and its year-round drinkability, is reflected by the fact Gordon’s Finest Scotch Highland Ale was awarded a silver medal at the 2017 World Beer Challenge, held in Estoril, Portugal. It is a beer that pairs well with roast beef or burgers topped with caramelised onions and mature cheese. Whether it is one to wash down haggis is another story. After all, that dish is rarely prepared in Genval, a community with an altitude of just 81 metres despite its outstanding highland ale. Brewer: John Martin Brewery Strength: 8.0 per cent