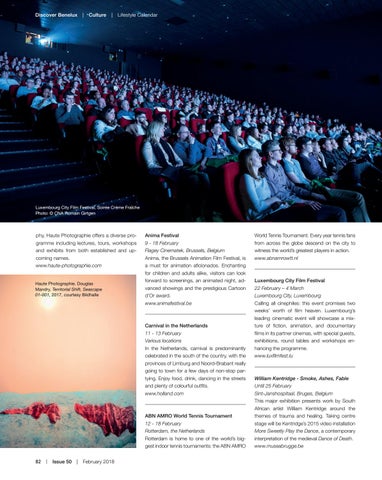 phy, Haute Photographie offers a diverse programme including lectures, tours, workshops and exhibits from both established and upcoming names. www.haute-photographie.com

Carnival in the Netherlands 11 - 13 February Various locations In the Netherlands, carnival is predominantly celebrated in the south of the country, with the provinces of Limburg and Noord-Brabant really going to town for a few days of non-stop partying. Enjoy food, drink, dancing in the streets and plenty of colourful outfits. www.holland.com

World Tennis Tournament. Every year tennis fans from across the globe descend on the city to witness the world’s greatest players in action. www.abnamrowtt.nl