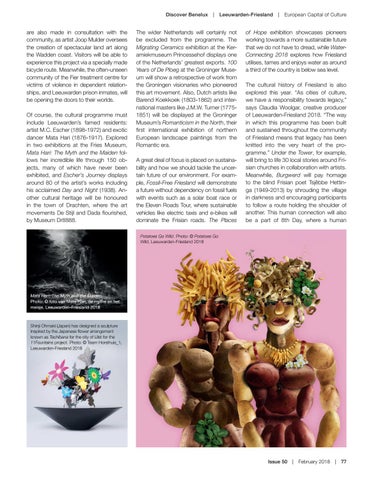 are also made in consultation with the community, as artist Joop Mulder oversees the creation of spectacular land art along the Wadden coast. Visitors will be able to experience this project via a specially made bicycle route. Meanwhile, the often-unseen community of the Fier treatment centre for victims of violence in dependent relationships, and Leeuwarden prison inmates, will be opening the doors to their worlds. Of course, the cultural programme must include Leeuwarden’s famed residents: artist M.C. Escher (1898-1972) and exotic dancer Mata Hari (1876-1917). Explored in two exhibitions at the Fries Museum, Mata Hari: The Myth and the Maiden follows her incredible life through 150 objects, many of which have never been exhibited, and Escher’s Journey displays around 80 of the artist’s works including his acclaimed Day and Night (1938). Another cultural heritage will be honoured in the town of Drachten, where the art movements De Stijl and Dada flourished, by Museum Dr8888.

The wider Netherlands will certainly not be excluded from the programme. The Migrating Ceramics exhibition at the Keramiekmuseum Princessehof displays one of the Netherlands’ greatest exports. 100 Years of De Ploeg at the Groninger Museum will show a retrospective of work from the Groningen visionaries who pioneered this art movement. Also, Dutch artists like Barend Koekkoek (1803-1862) and international masters like J.M.W. Turner (17751851) will be displayed at the Groninger Museum’s Romanticism in the North, their first international exhibition of northern European landscape paintings from the Romantic era. A great deal of focus is placed on sustainability and how we should tackle the uncertain future of our environment. For example, Fossil-Free Friesland will demonstrate a future without dependency on fossil fuels with events such as a solar boat race or the Eleven Roads Tour, where sustainable vehicles like electric taxis and e-bikes will dominate the Frisian roads. The Places

of Hope exhibition showcases pioneers working towards a more sustainable future that we do not have to dread, while WaterConnecting 2018 explores how Friesland utilises, tames and enjoys water as around a third of the country is below sea level. The cultural history of Friesland is also explored this year. “As cities of culture, we have a responsibility towards legacy,” says Claudia Woolgar, creative producer of Leeuwarden-Friesland 2018. “The way in which this programme has been built and sustained throughout the community of Friesland means that legacy has been knitted into the very heart of the programme.” Under the Tower, for example, will bring to life 30 local stories around Frisian churches in collaboration with artists. Meanwhile, Burgwerd will pay homage to the blind Frisian poet Tsjêbbe Hettinga (1949-2013) by shrouding the village in darkness and encouraging participants to follow a route holding the shoulder of another. This human connection will also be a part of 8th Day, where a human

Shinji Ohmaki (Japan) has designed a sculpture inspired by the Japanese flower arrangement known as Tachibana for the city of IJlst for the 11Fountains project. Photo: © Team Horsthuis_1, Leeuwarden-Friesland 2018