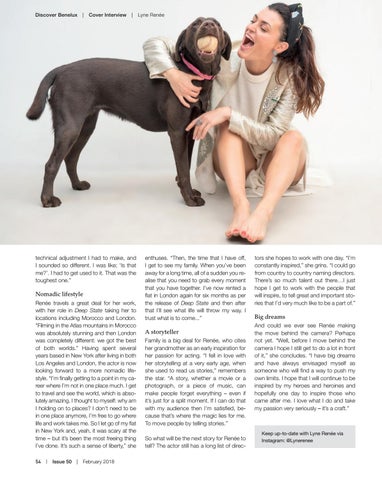 technical adjustment I had to make, and I sounded so different. I was like; ‘Is that me?’. I had to get used to it. That was the toughest one.”

Nomadic lifestyle Renée travels a great deal for her work, with her role in Deep State taking her to locations including Morocco and London. “Filming in the Atlas mountains in Morocco was absolutely stunning and then London was completely different: we got the best of both worlds.” Having spent several years based in New York after living in both Los Angeles and London, the actor is now looking forward to a more nomadic lifestyle. “I’m finally getting to a point in my career where I’m not in one place much. I get to travel and see the world, which is absolutely amazing. I thought to myself: why am I holding on to places? I don’t need to be in one place anymore, I’m free to go where life and work takes me. So I let go of my flat in New York and, yeah, it was scary at the time – but it’s been the most freeing thing I’ve done. It’s such a sense of liberty,” she 54  |  Issue 50  |  February 2018

enthuses. “Then, the time that I have off, I get to see my family. When you’ve been away for a long time, all of a sudden you realise that you need to grab every moment that you have together. I’ve now rented a flat in London again for six months as per the release of Deep State and then after that I’ll see what life will throw my way. I trust what is to come...”

A storyteller Family is a big deal for Renée, who cites her grandmother as an early inspiration for her passion for acting. “I fell in love with her storytelling at a very early age, when she used to read us stories,” remembers the star. “A story, whether a movie or a photograph, or a piece of music, can make people forget everything – even if it’s just for a split moment. If I can do that with my audience then I’m satisfied, because that’s where the magic lies for me. To move people by telling stories.” So what will be the next story for Renée to tell? The actor still has a long list of direc-

tors she hopes to work with one day. “I’m constantly inspired,” she grins. “I could go from country to country naming directors. There’s so much talent out there…I just hope I get to work with the people that will inspire, to tell great and important stories that I’d very much like to be a part of.”

Big dreams And could we ever see Renée making the move behind the camera? Perhaps not yet. “Well, before I move behind the camera I hope I still get to do a lot in front of it,” she concludes. “I have big dreams and have always envisaged myself as someone who will find a way to push my own limits. I hope that I will continue to be inspired by my heroes and heroines and hopefully one day to inspire those who came after me. I love what I do and take my passion very seriously – it’s a craft.”