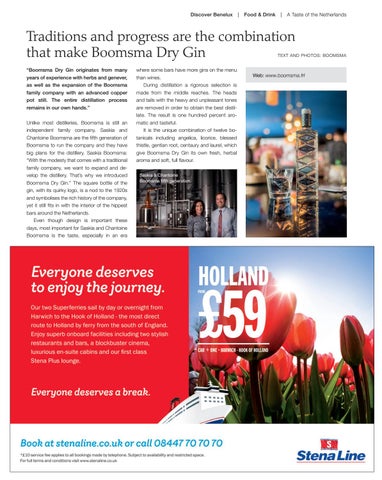 Traditions and progress are the combination that make Boomsma Dry Gin

“Boomsma Dry Gin originates from many years of experience with herbs and genever, as well as the expansion of the Boomsma family company with an advanced copper pot still. The entire distillation process remains in our own hands.” Unlike most distilleries, Boomsma is still an independent family company. Saskia and Chantoine Boomsma are the fifth generation of Boomsma to run the company and they have big plans for the distillery. Saskia Boomsma: “With the modesty that comes with a traditional family company, we want to expand and develop the distillery. That’s why we introduced Boomsma Dry Gin.” The square bottle of the gin, with its quirky logo, is a nod to the 1920s and symbolises the rich history of the company, yet it still fits in with the interior of the hippest bars around the Netherlands. Even though design is important these days, most important for Saskia and Chantoine Boomsma is the taste, especially in an era

where some bars have more gins on the menu than wines. During distillation a rigorous selection is made from the middle reaches. The heads and tails with the heavy and unpleasant tones are removed in order to obtain the best distillate. The result is one hundred percent aromatic and tasteful. It is the unique combination of twelve botanicals including angelica, licorice, blessed thistle, gentian root, centaury and laurel, which give Boomsma Dry Gin its own fresh, herbal aroma and soft, full flavour. Saskia & Chantoine Boomsma fifth generation.