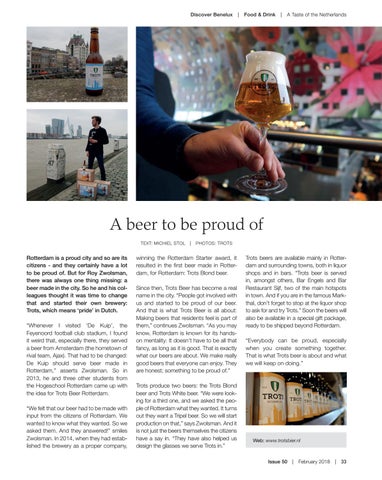 A beer to be proud of TEXT: MICHIEL STOL  |  PHOTOS: TROTS

Rotterdam is a proud city and so are its citizens - and they certainly have a lot to be proud of. But for Roy Zwolsman, there was always one thing missing: a beer made in the city. So he and his colleagues thought it was time to change that and started their own brewery: Trots, which means ‘pride’ in Dutch. “Whenever I visited ‘De Kuip’, the Feyenoord football club stadium, I found it weird that, especially there, they served a beer from Amsterdam (the hometown of rival team, Ajax). That had to be changed: De Kuip should serve beer made in Rotterdam,” asserts Zwolsman. So in 2013, he and three other students from the Hogeschool Rotterdam came up with the idea for Trots Beer Rotterdam. “We felt that our beer had to be made with input from the citizens of Rotterdam. We wanted to know what they wanted. So we asked them. And they answered!” smiles Zwolsman. In 2014, when they had established the brewery as a proper company,

winning the Rotterdam Starter award, it resulted in the first beer made in Rotterdam, for Rotterdam: Trots Blond beer. Since then, Trots Beer has become a real name in the city. “People got involved with us and started to be proud of our beer. And that is what Trots Beer is all about: Making beers that residents feel is part of them,” continues Zwolsman. “As you may know, Rotterdam is known for its handson mentality: It doesn’t have to be all that fancy, as long as it is good. That is exactly what our beers are about. We make really good beers that everyone can enjoy. They are honest; something to be proud of.” Trots produce two beers: the Trots Blond beer and Trots White beer. “We were looking for a third one, and we asked the people of Rotterdam what they wanted. It turns out they want a Tripel beer. So we will start production on that,” says Zwolsman. And it is not just the beers themselves the citizens have a say in. “They have also helped us design the glasses we serve Trots in.”

Trots beers are available mainly in Rotterdam and surrounding towns, both in liquor shops and in bars. “Trots beer is served in, amongst others, Bar Engels and Bar Restaurant Sijf, two of the main hotspots in town. And if you are in the famous Markthal, don’t forget to stop at the liquor shop to ask for and try Trots.” Soon the beers will also be available in a special gift package, ready to be shipped beyond Rotterdam. “Everybody can be proud, especially when you create something together. That is what Trots beer is about and what we will keep on doing.”