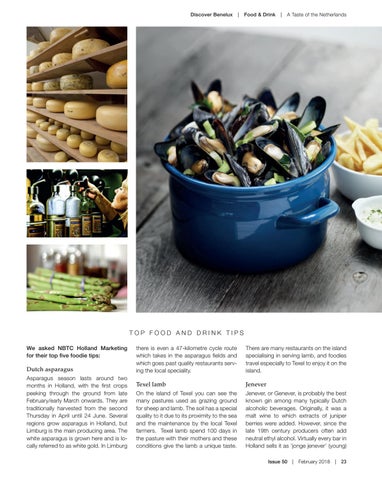 Dutch asparagus Asparagus season lasts around two months in Holland, with the first crops peeking through the ground from late February/early March onwards. They are traditionally harvested from the second Thursday in April until 24 June. Several regions grow asparagus in Holland, but Limburg is the main producing area. The white asparagus is grown here and is locally referred to as white gold. In Limburg

there is even a 47-kilometre cycle route which takes in the asparagus fields and which goes past quality restaurants serving the local speciality.

There are many restaurants on the island specialising in serving lamb, and foodies travel especially to Texel to enjoy it on the island.

On the island of Texel you can see the many pastures used as grazing ground for sheep and lamb. The soil has a special quality to it due to its proximity to the sea and the maintenance by the local Texel farmers. Texel lamb spend 100 days in the pasture with their mothers and these conditions give the lamb a unique taste.

Jenever, or Genever, is probably the best known gin among many typically Dutch alcoholic beverages. Originally, it was a malt wine to which extracts of juniper berries were added. However, since the late 19th century producers often add neutral ethyl alcohol. Virtually every bar in Holland sells it as ‘jonge jenever’ (young) Issue 50  |  February 2018  |  23