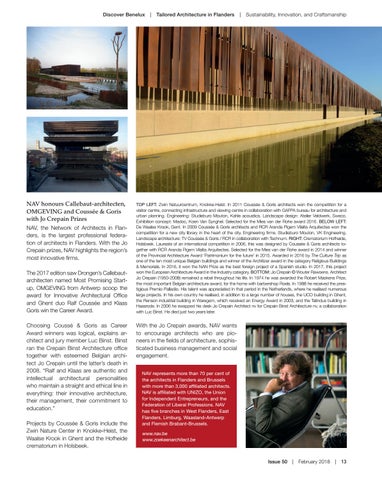 NAV honours Callebaut-architecten, OMGEVING and Coussée & Goris with Jo Crepain Prizes NAV, the Network of Architects in Flanders, is the largest professional federation of architects in Flanders. With the Jo Crepain prizes, NAV highlights the region’s most innovative firms. The 2017 edition saw Drongen’s Callebautarchitecten named Most Promising Startup, OMGEVING from Antwerp scoop the award for Innovative Architectural Office and Ghent duo Ralf Coussée and Klaas Goris win the Career Award. Choosing Coussé & Goris as Career Award winners was logical, explains architect and jury member Luc Binst. Binst ran the Crepain Binst Architecture office together with esteemed Belgian architect Jo Crepain until the latter’s death in 2008. “Ralf and Klaas are authentic and intellectual architectural personalities who maintain a straight and ethical line in everything: their innovative architecture, their management, their commitment to education.” Projects by Coussée & Goris include the Zwin Nature Center in Knokke-Heist, the Waalse Krook in Ghent and the Hofheide crematorium in Holsbeek.

TOP LEFT: Zwin Natuurcentrum, Knokke-Heist. In 2011 Coussée & Goris architects won the competition for a visitor centre, connecting infrastructure and viewing centre in collaboration with GAFPA bureau for architecture and urban planning. Engineering: Studieburo Mouton, Kahle acoustics. Landscape design: Atelier Veldwerk, Sweco. Exhibition concept: Madoc, Koen Van Synghel. Selected for the Mies van der Rohe award 2016. BELOW LEFT: De Waalse Krook, Gent. In 2009 Coussée & Goris architects and RCR Aranda Pigem Vilalta Arquitectes won the competition for a new city library in the heart of the city. Engineering firms: Studieburo Mouton, VK Engineering. Landscape architecture: TV Coussée & Goris / RCR in collaboration with Technum. RIGHT: Crematorium Hofheide, Holsbeek. Laureate of an international competition in 2006, this was designed by Coussée & Goris architects together with RCR Aranda Pigem Vilalta Arquitectes. Selected for the Mies van der Rohe award in 2014 and winner of the Provincial Architecture Award ‘Patrimonium for the future’ in 2015. Awarded in 2016 by The Culture Trip as one of the ten most unique Belgian buildings and winner of the Architizer award in the category Religious Buildings & Memorials. In 2016, it won the NAN Prize as the best foreign project of a Spanish studio. In 2017, this project won the European Architecture Award in the Industry category. BOTTOM: Jo Crepain © Wouter Rawoens. Architect Jo Crepain (1950-2008) remained a rebel throughout his life. In 1974 he was awarded the Robert Maskens Prize, the most important Belgian architecture award, for the home with barbershop Roels. In 1988 he received the prestigious Premio Palladio. His talent was appreciated in that period in the Netherlands, where he realised numerous large projects. In his own country he realised, in addition to a large number of houses, the UCO building in Ghent, the Renson industrial building in Waregem, which received an Energy Award in 2003, and the Telindus building in Haasrode. In 2006 he swapped his desk Jo Crepain Architect nv for Crepain Binst Architecture nv, a collaboration with Luc Binst. He died just two years later.

With the Jo Crepain awards, NAV wants to encourage architects who are pioneers in the fields of architecture, sophisticated business management and social engagement. NAV represents more than 70 per cent of the architects in Flanders and Brussels with more than 3,000 affiliated architects. NAV is affiliated with UNIZO, the Union for Independent Entrepreneurs, and the Federation of Liberal Professions. NAV has five branches in West Flanders, East Flanders, Limburg, Waasland-Antwerp and Flemish Brabant-Brussels.