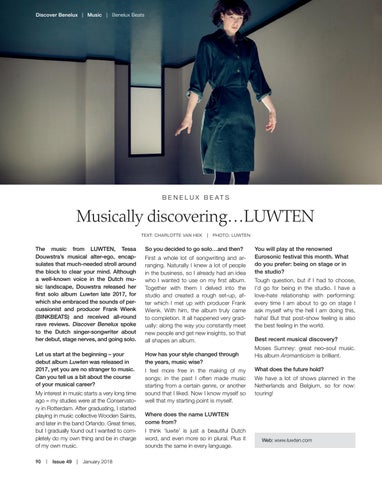 The music from LUWTEN, Tessa Douwstra’s musical alter-ego, encapsulates that much-needed stroll around the block to clear your mind. Although a well-known voice in the Dutch music landscape, Douwstra released her first solo album Luwten late 2017, for which she embraced the sounds of percussionist and producer Frank Wienk (BINKBEATS) and received all-round rave reviews. Discover Benelux spoke to the Dutch singer-songwriter about her debut, stage nerves, and going solo.

So you decided to go solo…and then?

Let us start at the beginning – your debut album Luwten was released in 2017, yet you are no stranger to music. Can you tell us a bit about the course of your musical career?

How has your style changed through the years, music wise?

My interest in music starts a very long time ago – my studies were at the Conservatory in Rotterdam. After graduating, I started playing in music collective Wooden Saints, and later in the band Orlando. Great times, but I gradually found out I wanted to completely do my own thing and be in charge of my own music. 90  |  Issue 49  |  January 2018

First a whole lot of songwriting and arranging. Naturally I knew a lot of people in the business, so I already had an idea who I wanted to use on my first album. Together with them I delved into the studio and created a rough set-up, after which I met up with producer Frank Wienk. With him, the album truly came to completion. It all happened very gradually: along the way you constantly meet new people and get new insights, so that all shapes an album.

I feel more free in the making of my songs: in the past I often made music starting from a certain genre, or another sound that I liked. Now I know myself so well that my starting point is myself.

You will play at the renowned Eurosonic festival this month. What do you prefer: being on stage or in the studio? Tough question, but if I had to choose, I’d go for being in the studio. I have a love-hate relationship with performing: every time I am about to go on stage I ask myself why the hell I am doing this, haha! But that post-show feeling is also the best feeling in the world. Best recent musical discovery? Moses Sumney: great neo-soul music. His album Aromanticism is brilliant. What does the future hold? We have a lot of shows planned in the Netherlands and Belgium, so for now: touring!

Where does the name LUWTEN come from? I think ‘luwte’ is just a beautiful Dutch word, and even more so in plural. Plus it sounds the same in every language.