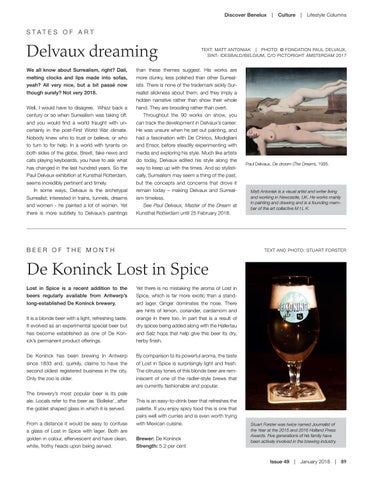 Delvaux dreaming We all know about Surrealism, right? Dalí, melting clocks and lips made into sofas, yeah? All very nice, but a bit passé now though surely? Not very 2018. Well, I would have to disagree. Whizz back a century or so when Surrealism was taking off, and you would find a world fraught with uncertainly in the post-First World War climate. Nobody knew who to trust or believe, or who to turn to for help. In a world with tyrants on both sides of the globe, Brexit, fake news and cats playing keyboards, you have to ask what has changed in the last hundred years. So the Paul Delvaux exhibition at Kunsthal Rotterdam, seems incredibly pertinent and timely. In some ways, Delvaux is the archetypal Surrealist; interested in trains, tunnels, dreams and women - he painted a lot of women. Yet there is more subtlety to Delvaux’s paintings

than these themes suggest. His works are more clunky, less polished than other Surrealists. There is none of the trademark sickly Surrealist slickness about them, and they imply a hidden narrative rather than show their whole hand. They are brooding rather than overt. Throughout the 90 works on show, you can track the development in Delvaux’s career. He was unsure when he set out painting, and had a fascination with De Chirico, Modigliani and Ensor, before steadily experimenting with media and exploring his style. Much like artists do today, Delvaux edited his style along the way to keep up with the times. And so stylistically, Surrealism may seem a thing of the past, but the concepts and concerns that drove it remain today – making Delvaux and Surrealism timeless. See Paul Delvaux, Master of the Dream at Kunsthal Rotterdam until 25 February 2018.

De Koninck Lost in Spice Lost in Spice is a recent addition to the beers regularly available from Antwerp’s long-established De Koninck brewery. It is a blonde beer with a light, refreshing taste. It evolved as an experimental special beer but has become established as one of De Konick’s permanent product offerings. De Koninck has been brewing in Antwerp since 1833 and, quirkily, claims to have the second oldest registered business in the city. Only the zoo is older. The brewery’s most popular beer is its pale ale. Locals refer to the beer as ‘Bolleke’, after the goblet shaped glass in which it is served. From a distance it would be easy to confuse a glass of Lost in Spice with lager. Both are golden in colour, effervescent and have clean, white, frothy heads upon being served.

Yet there is no mistaking the aroma of Lost in Spice, which is far more exotic than a standard lager. Ginger dominates the nose. There are hints of lemon, coriander, cardamom and orange in there too. In part that is a result of dry spices being added along with the Hallertau and Salz hops that help give this beer its dry, herby finish. By comparison to its powerful aroma, the taste of Lost in Spice is surprisingly light and fresh. The citrussy tones of this blonde beer are reminiscent of one of the radler-style brews that are currently fashionable and popular. This is an easy-to-drink beer that refreshes the palette. If you enjoy spicy food this is one that pairs well with curries and is even worth trying with Mexican cuisine. Brewer: De Koninck Strength: 5.2 per cent