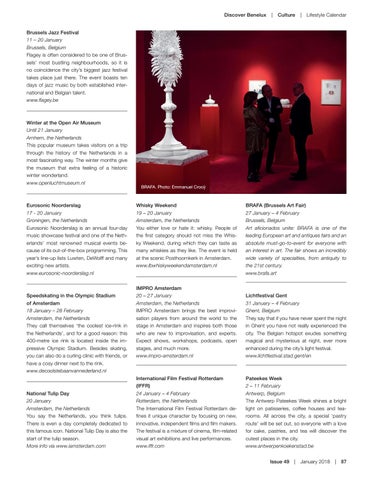 Discover Benelux  |  Culture  |  Lifestyle Calendar Brussels Jazz Festival 11 – 20 January Brussels, Belgium Flagey is often considered to be one of Brussels’ most bustling neighbourhoods, so it is no coincidence the city’s biggest jazz festival takes place just there. The event boasts ten days of jazz music by both established international and Belgian talent. www.flagey.be

Winter at the Open Air Museum Until 21 January Arnhem, the Netherlands This popular museum takes visitors on a trip through the history of the Netherlands in a most fascinating way. The winter months give the museum that extra feeling of a historic winter wonderland. www.openluchtmuseum.nl

Speedskating in the Olympic Stadium of Amsterdam 18 January – 28 February Amsterdam, the Netherlands They call themselves ‘the coolest ice-rink in the Netherlands’, and for a good reason: this 400-metre ice rink is located inside the impressive Olympic Stadium. Besides skating, you can also do a curling clinic with friends, or have a cosy dinner next to the rink. www.decoolstebaanvannederland.nl

Whisky Weekend 19 – 20 January Amsterdam, the Netherlands You either love or hate it: whisky. People of the first category should not miss the Whisky Weekend, during which they can taste as many whiskies as they like. The event is held at the scenic Posthoornkerk in Amsterdam. www.lbwhiskyweekendamsterdam.nl

BRAFA (Brussels Art Fair) 27 January – 4 February Brussels, Belgium Art aficionados unite: BRAFA is one of the leading European art and antiques fairs and an absolute must-go-to-event for everyone with an interest in art. The fair shows an incredibly wide variety of specialties, from antiquity to the 21st century. www.brafa.art

IMPRO Amsterdam 20 – 27 January Amsterdam, the Netherlands IMPRO Amsterdam brings the best improvisation players from around the world to the stage in Amsterdam and inspires both those who are new to improvisation, and experts. Expect shows, workshops, podcasts, open stages, and much more. www.impro-amsterdam.nl

Lichtfestival Gent 31 January – 4 February Ghent, Belgium They say that if you have never spent the night in Ghent you have not really experienced the city. The Belgian hotspot exudes something magical and mysterious at night, ever more enhanced during the city’s light festival. www.lichtfestival.stad.gent/en

Pateekes Week 2 – 11 February Antwerp, Belgium The Antwerp Pateekes Week shines a bright light on patisseries, coffee houses and tearooms. All across the city, a special ‘pastry route’ will be set out, so everyone with a love for cake, pastries, and tea will discover the cutest places in the city. www.antwerpenkoekenstad.be Issue 49  |  January 2018  |  87