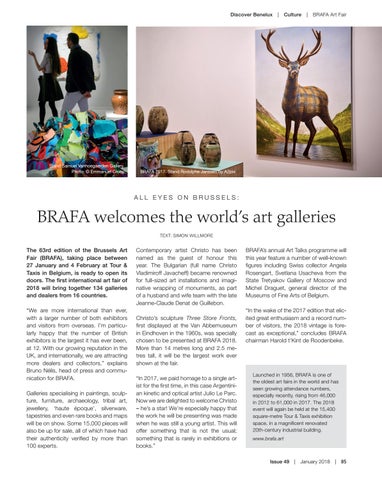 The 63rd edition of the Brussels Art Fair (BRAFA), taking place between 27 January and 4 February at Tour & Taxis in Belgium, is ready to open its doors. The first international art fair of 2018 will bring together 134 galleries and dealers from 16 countries.  “We are more international than ever, with a larger number of both exhibitors and visitors from overseas. I’m particularly happy that the number of British exhibitors is the largest it has ever been, at 12. With our growing reputation in the UK, and internationally, we are attracting more dealers and collectors,” explains Bruno Nélis, head of press and communication for BRAFA.   Galleries specialising in paintings, sculpture, furniture, archaeology, tribal art, jewellery, ‘haute époque’, silverware, tapestries and even rare books and maps will be on show. Some 15,000 pieces will also be up for sale, all of which have had their authenticity verified by more than 100 experts.

Contemporary artist Christo has been named as the guest of honour this year. The Bulgarian (full name Christo Vladimiroff Javacheff) became renowned for full-sized art installations and imaginative wrapping of monuments, as part of a husband and wife team with the late Jeanne-Claude Denat de Guillebon. Christo’s sculpture Three Store Fronts, first displayed at the Van Abbemuseum in Eindhoven in the 1960s, was specially chosen to be presented at BRAFA 2018. More than 14 metres long and 2.5 metres tall, it will be the largest work ever shown at the fair. “In 2017, we paid homage to a single artist for the first time, in this case Argentinian kinetic and optical artist Julio Le Parc. Now we are delighted to welcome Christo – he’s a star! We’re especially happy that the work he will be presenting was made when he was still a young artist. This will offer something that is not the usual; something that is rarely in exhibitions or books.”

BRAFA’s annual Art Talks programme will this year feature a number of well-known figures including Swiss collector Angela Rosengart, Svetlana Usacheva from the State Tretyakov Gallery of Moscow and Michel Draguet, general director of the Museums of Fine Arts of Belgium. “In the wake of the 2017 edition that elicited great enthusiasm and a record number of visitors, the 2018 vintage is forecast as exceptional,” concludes BRAFA chairman Harold t’Kint de Roodenbeke.

Launched in 1956, BRAFA is one of the oldest art fairs in the world and has seen growing attendance numbers, especially recently, rising from 46,000 in 2012 to 61,000 in 2017. The 2018 event will again be held at the 15,400 square-metre Tour & Taxis exhibition space, in a magnificent renovated 20th-century industrial building. www.brafa.art