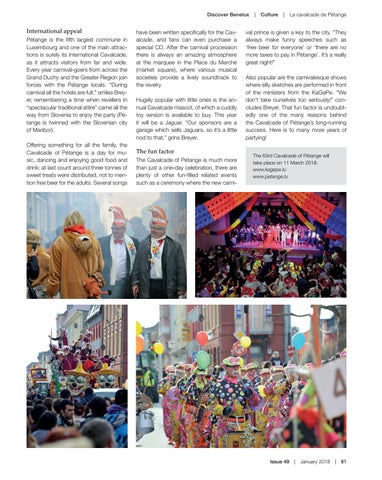 International appeal Pétange is the fifth largest commune in Luxembourg and one of the main attractions is surely its international Cavalcade, as it attracts visitors from far and wide. Every year carnival-goers from across the Grand Duchy and the Greater Region join forces with the Pétange locals. “During carnival all the hotels are full,” smiles Breyer, remembering a time when revellers in “spectacular traditional attire” came all the way from Slovenia to enjoy the party (Pétange is twinned with the Slovenian city of Maribor). Offering something for all the family, the Cavalcade of Pétange is a day for music, dancing and enjoying good food and drink: at last count around three tonnes of sweet treats were distributed, not to mention free beer for the adults. Several songs

have been written specifically for the Cavalcade, and fans can even purchase a special CD. After the carnival procession there is always an amazing atmosphere at the marquee in the Place du Marché (market square), where various musical societies provide a lively soundtrack to the revelry. Hugely popular with little ones is the annual Cavalcade mascot, of which a cuddly toy version is available to buy. This year it will be a Jaguar. “Our sponsors are a garage which sells Jaguars, so it’s a little nod to that,” grins Breyer.

The fun factor The Cavalcade of Pétange is much more than just a one-day celebration, there are plenty of other fun-filled related events such as a ceremony where the new carni-

val prince is given a key to the city. “They always make funny speeches such as ‘free beer for everyone’ or ‘there are no more taxes to pay in Pétange’. It’s a really great night!” Also popular are the carnivalesque shows where silly sketches are performed in front of the ministers from the KaGePe. “We don’t take ourselves too seriously!” concludes Breyer. That fun factor is undoubtedly one of the many reasons behind the Cavalcade of Pétange’s long-running success. Here is to many more years of partying! The 63rd Cavalcade of Pétange will take place on 11 March 2018. www.kagepe.lu www.petange.lu