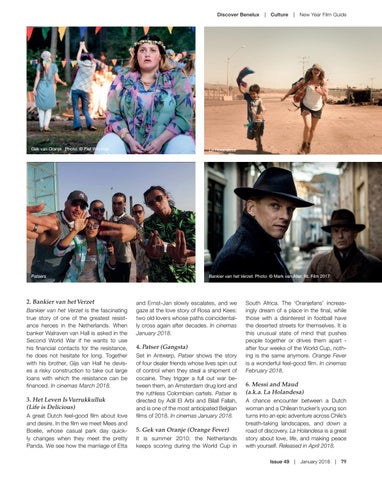 2. Bankier van het Verzet Bankier van het Verzet is the fascinating true story of one of the greatest resistance heroes in the Netherlands. When banker Walraven van Hall is asked in the Second World War if he wants to use his financial contacts for the resistance, he does not hesitate for long. Together with his brother, Gijs van Hall he devises a risky construction to take out large loans with which the resistance can be financed. In cinemas March 2018.

3. Het Leven Is Vurrukkulluk (Life is Delicious) A great Dutch feel-good film about love and desire. In the film we meet Mees and Boelie, whose casual park day quickly changes when they meet the pretty Panda. We see how the marriage of Etta

and Ernst-Jan slowly escalates, and we gaze at the love story of Rosa and Kees: two old lovers whose paths coincidentally cross again after decades. In cinemas January 2018.

4. Patser (Gangsta) Set in Antwerp, Patser shows the story of four dealer friends whose lives spin out of control when they steal a shipment of cocaine. They trigger a full out war between them, an Amsterdam drug lord and the ruthless Colombian cartels. Patser is directed by Adil El Arbi and Bilall Fallah, and is one of the most anticipated Belgian films of 2018. In cinemas January 2018.

5. Gek van Oranje (Orange Fever) It is summer 2010: the Netherlands keeps scoring during the World Cup in

South Africa. The ‘Oranjefans’ increasingly dream of a place in the final, while those with a disinterest in football have the deserted streets for themselves. It is this unusual state of mind that pushes people together or drives them apart after four weeks of the World Cup, nothing is the same anymore. Orange Fever is a wonderful feel-good film. In cinemas February 2018.

6. Messi and Maud (a.k.a. La Holandesa) A chance encounter between a Dutch woman and a Chilean trucker’s young son turns into an epic adventure across Chile’s breath-taking landscapes, and down a road of discovery. La Holandesa is a great story about love, life, and making peace with yourself. Released in April 2018. Issue 49  |  January 2018  |  79