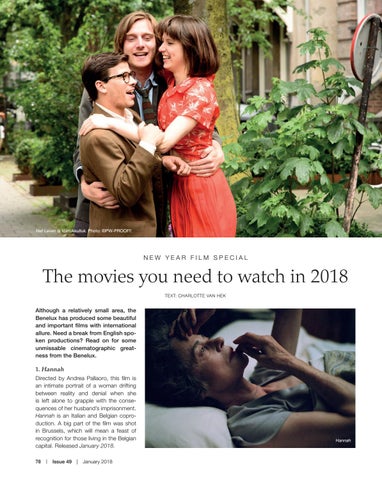 The movies you need to watch in 2018 TEXT: CHARLOTTE VAN HEK

Although a relatively small area, the Benelux has produced some beautiful and important films with international allure. Need a break from English spoken productions? Read on for some unmissable cinematographic greatness from the Benelux.

1. Hannah Directed by Andrea Pallaoro, this film is an intimate portrait of a woman drifting between reality and denial when she is left alone to grapple with the consequences of her husband’s imprisonment. Hannah is an Italian and Belgian coproduction. A big part of the film was shot in Brussels, which will mean a feast of recognition for those living in the Belgian capital. Released January 2018. 78  |  Issue 49  |  January 2018