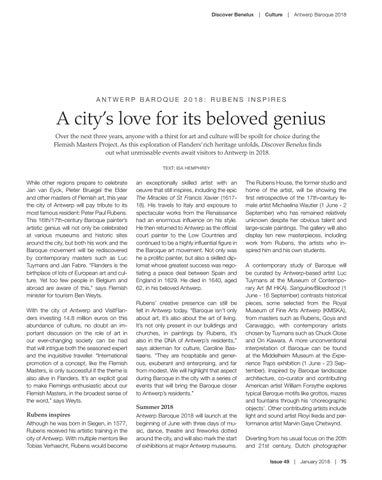 A city’s love for its beloved genius Over the next three years, anyone with a thirst for art and culture will be spoilt for choice during the Flemish Masters Project. As this exploration of Flanders’ rich heritage unfolds, Discover Benelux finds out what unmissable events await visitors to Antwerp in 2018. TEXT: ISA HEMPHREY

While other regions prepare to celebrate Jan van Eyck, Pieter Bruegel the Elder and other masters of Flemish art, this year the city of Antwerp will pay tribute to its most famous resident: Peter Paul Rubens. This 16th/17th-century Baroque painter’s artistic genius will not only be celebrated at various museums and historic sites around the city, but both his work and the Baroque movement will be rediscovered by contemporary masters such as Luc Tuymans and Jan Fabre. “Flanders is the birthplace of lots of European art and culture. Yet too few people in Belgium and abroad are aware of this,” says Flemish minister for tourism Ben Weyts. With the city of Antwerp and VisitFlanders investing 14.8 million euros on this abundance of culture, no doubt an important discussion on the role of art in our ever-changing society can be had that will intrigue both the seasoned expert and the inquisitive traveller. “International promotion of a concept, like the Flemish Masters, is only successful if the theme is also alive in Flanders. It’s an explicit goal to make Flemings enthusiastic about our Flemish Masters, in the broadest sense of the word,” says Weyts.

Rubens inspires Although he was born in Siegen, in 1577, Rubens received his artistic training in the city of Antwerp. With multiple mentors like Tobias Verhaecht, Rubens would become

an exceptionally skilled artist with an oeuvre that still inspires, including the epic The Miracles of St Francis Xavier (161718). His travels to Italy and exposure to spectacular works from the Renaissance had an enormous influence on his style. He then returned to Antwerp as the official court painter to the Low Countries and continued to be a highly influential figure in the Baroque art movement. Not only was he a prolific painter, but also a skilled diplomat whose greatest success was negotiating a peace deal between Spain and England in 1629. He died in 1640, aged 62, in his beloved Antwerp. Rubens’ creative presence can still be felt in Antwerp today. “Baroque isn’t only about art, it’s also about the art of living. It’s not only present in our buildings and churches, in paintings by Rubens, it’s also in the DNA of Antwerp’s residents,” says alderman for culture, Caroline Bastiaens. “They are hospitable and generous, exuberant and enterprising, and far from modest. We will highlight that aspect during Baroque in the city with a series of events that will bring the Baroque closer to Antwerp’s residents.”

Summer 2018 Antwerp Baroque 2018 will launch at the beginning of June with three days of music, dance, theatre and fireworks dotted around the city, and will also mark the start of exhibitions at major Antwerp museums.

The Rubens House, the former studio and home of the artist, will be showing the first retrospective of the 17th-century female artist Michaelina Wautier (1 June - 2 September) who has remained relatively unknown despite her obvious talent and large-scale paintings. The gallery will also display ten new masterpieces, including work from Rubens, the artists who inspired him and his own students. A contemporary study of Baroque will be curated by Antwerp-based artist Luc Tuymans at the Museum of Contemporary Art (M HKA). Sanguine/Bloedrood (1 June - 16 September) contrasts historical pieces, some selected from the Royal Museum of Fine Arts Antwerp (KMSKA), from masters such as Rubens, Goya and Caravaggio, with contemporary artists chosen by Tuymans such as Chuck Close and On Kawara. A more unconventional interpretation of Baroque can be found at the Middelheim Museum at the Experience Traps exhibition (1 June - 23 September). Inspired by Baroque landscape architecture, co-curator and contributing American artist William Forsythe explores typical Baroque motifs like grottos, mazes and fountains through his ‘choreographic objects’. Other contributing artists include light and sound artist Rioyi Ikeda and performance artist Marvin Gaye Chetwynd. Diverting from his usual focus on the 20th and 21st century, Dutch photographer Issue 49  |  January 2018  |  75