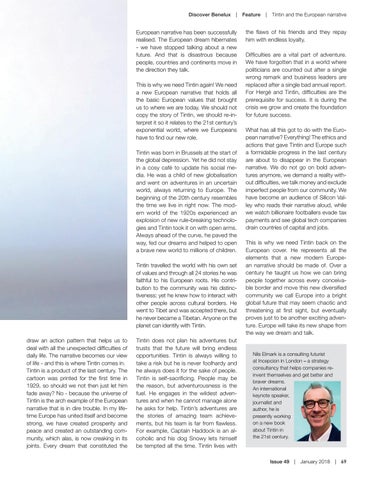 European narrative has been successfully realised. The European dream hibernates - we have stopped talking about a new future. And that is disastrous because people, countries and continents move in the direction they talk. This is why we need Tintin again! We need a new European narrative that holds all the basic European values that brought us to where we are today. We should not copy the story of Tintin, we should re-interpret it so it relates to the 21st century’s exponential world, where we Europeans have to find our new role. Tintin was born in Brussels at the start of the global depression. Yet he did not stay in a cosy café to update his social media. He was a child of new globalisation and went on adventures in an uncertain world, always returning to Europe. The beginning of the 20th century resembles the time we live in right now. The modern world of the 1920s experienced an explosion of new rule-breaking technologies and Tintin took it on with open arms. Always ahead of the curve, he paved the way, fed our dreams and helped to open a brave new world to millions of children. Tintin travelled the world with his own set of values and through all 24 stories he was faithful to his European roots. His contribution to the community was his distinctiveness; yet he knew how to interact with other people across cultural borders. He went to Tibet and was accepted there, but he never became a Tibetan. Anyone on the planet can identify with Tintin. draw an action pattern that helps us to deal with all the unexpected difficulties of daily life. The narrative becomes our view of life - and this is where Tintin comes in. Tintin is a product of the last century. The cartoon was printed for the first time in 1929, so should we not then just let him fade away? No - because the universe of Tintin is the arch example of the European narrative that is in dire trouble. In my lifetime Europe has united itself and become strong, we have created prosperity and peace and created an outstanding community, which alas, is now creaking in its joints. Every dream that constituted the

Tintin does not plan his adventures but trusts that the future will bring endless opportunities. Tintin is always willing to take a risk but he is never foolhardy and he always does it for the sake of people. Tintin is self-sacrificing. People may be the reason, but adventurousness is the fuel. He engages in the wildest adventures and when he cannot manage alone he asks for help. Tintin’s adventures are the stories of amazing team achievements, but his team is far from flawless. For example, Captain Haddock is an alcoholic and his dog Snowy lets himself be tempted all the time. Tintin lives with

the flaws of his friends and they repay him with endless loyalty. Difficulties are a vital part of adventure. We have forgotten that in a world where politicians are counted out after a single wrong remark and business leaders are replaced after a single bad annual report. For Hergé and Tintin, difficulties are the prerequisite for success. It is during the crisis we grow and create the foundation for future success. What has all this got to do with the European narrative? Everything! The ethics and actions that gave Tintin and Europe such a formidable progress in the last century are about to disappear in the European narrative. We do not go on bold adventures anymore, we demand a reality without difficulties, we talk money and exclude imperfect people from our community. We have become an audience of Silicon Valley who reads their narrative aloud, while we watch billionaire footballers evade tax payments and see global tech companies drain countries of capital and jobs. This is why we need Tintin back on the European cover. He represents all the elements that a new modern European narrative should be made of. Over a century he taught us how we can bring people together across every conceivable border and move this new diversified community we call Europe into a bright global future that may seem chaotic and threatening at first sight, but eventually proves just to be another exciting adventure. Europe will take its new shape from the way we dream and talk.

Nils Elmark is a consulting futurist at Incepcion in London – a strategy consultancy that helps companies reinvent themselves and get better and braver dreams. An international keynote speaker, journalist and author, he is presently working on a new book about Tintin in the 21st century.