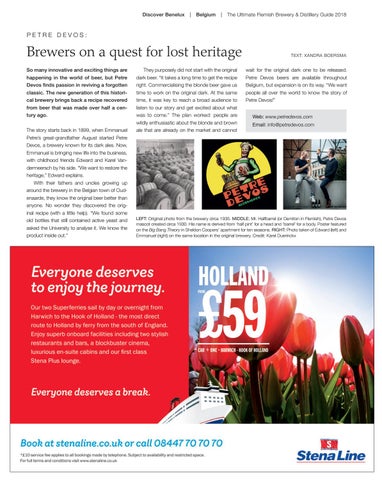 Brewers on a quest for lost heritage So many innovative and exciting things are happening in the world of beer, but Petre Devos finds passion in reviving a forgotten classic. The new generation of this historical brewery brings back a recipe recovered from beer that was made over half a century ago. The story starts back in 1899, when Emmanuel Petre’s great-grandfather August started Petre Devos, a brewery known for its dark ales. Now, Emmanuel is bringing new life into the business, with childhood friends Edward and Karel Vandermeersch by his side. “We want to restore the heritage,” Edward explains. With their fathers and uncles growing up around the brewery in the Belgian town of Oudenaarde, they know the original beer better than anyone. No wonder they discovered the original recipe (with a little help). “We found some old bottles that still contained active yeast and asked the University to analyse it. We know the product inside out.”

They purposely did not start with the original dark beer. “It takes a long time to get the recipe right. Commercialising the blonde beer gave us time to work on the original dark. At the same time, it was key to reach a broad audience to listen to our story and get excited about what was to come.” The plan worked: people are wildly enthusiastic about the blonde and brown ale that are already on the market and cannot

wait for the original dark one to be released. Petre Devos beers are available throughout Belgium, but expansion is on its way. “We want people all over the world to know the story of Petre Devos!” Web: www.petredevos.com Email: info@petredevos.com

LEFT: Original photo from the brewery circa 1935. MIDDLE: Mr. Halfbarrel (or Demiton in Flemish), Petre Devos mascot created circa 1930. His name is derived from ‘half pint’ for a head and ‘barrel’ for a body. Poster featured on the Big Bang Theory in Sheldon Coopers’ apartment for ten seasons. RIGHT: Photo taken of Edward (left) and Emmanuel (right) on the same location in the original brewery. Credit: Karel Duerinckx