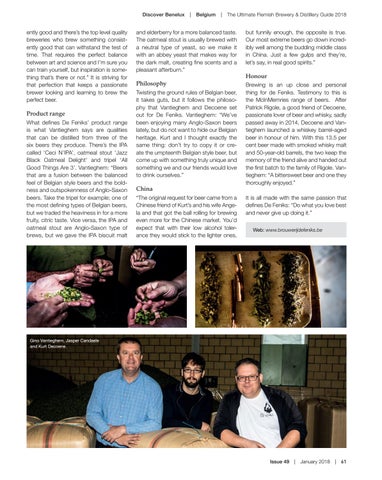 ently good and there’s the top level quality breweries who brew something consistently good that can withstand the test of time. That requires the perfect balance between art and science and I’m sure you can train yourself, but inspiration is something that’s there or not.” It is striving for that perfection that keeps a passionate brewer looking and learning to brew the perfect beer.

Product range What defines De Feniks’ product range is what Vantieghem says are qualities that can be distilled from three of the six beers they produce. There’s the IPA called ‘Ceci N’IPA’, oatmeal stout ‘Jazz Black Oatmeal Delight’ and tripel ‘All Good Things Are 3’. Vantieghem: “Beers that are a fusion between the balanced feel of Belgian style beers and the boldness and outspokenness of Anglo-Saxon beers. Take the tripel for example; one of the most defining types of Belgian beers, but we traded the heaviness in for a more fruity, citric taste. Vice versa, the IPA and oatmeal stout are Anglo-Saxon type of brews, but we gave the IPA biscuit malt

and elderberry for a more balanced taste. The oatmeal stout is usually brewed with a neutral type of yeast, so we make it with an abbey yeast that makes way for the dark malt, creating fine scents and a pleasant afterburn.”

Philosophy Twisting the ground rules of Belgian beer, it takes guts, but it follows the philosophy that Vantieghem and Decoene set out for De Feniks. Vantieghem: “We’ve been enjoying many Anglo-Saxon beers lately, but do not want to hide our Belgian heritage. Kurt and I thought exactly the same thing: don’t try to copy it or create the umpteenth Belgian style beer, but come up with something truly unique and something we and our friends would love to drink ourselves.”

China “The original request for beer came from a Chinese friend of Kurt’s and his wife Angela and that got the ball rolling for brewing even more for the Chinese market. You’d expect that with their low alcohol tolerance they would stick to the lighter ones,

but funnily enough, the opposite is true. Our most extreme beers go down incredibly well among the budding middle class in China. Just a few gulps and they’re, let’s say, in real good spirits.”

Honour Brewing is an up close and personal thing for de Feniks. Testimony to this is the McInMemries range of beers. After Patrick Rigole, a good friend of Decoene, passionate lover of beer and whisky, sadly passed away in 2014, Decoene and Vantieghem launched a whiskey barrel-aged beer in honour of him. With this 13.5 per cent beer made with smoked whisky malt and 50-year-old barrels, the two keep the memory of the friend alive and handed out the first batch to the family of Rigole. Vantieghem: “A bittersweet beer and one they thoroughly enjoyed.” It is all made with the same passion that defines De Feniks: “Do what you love best and never give up doing it.” Web: www.brouwerijdefeniks.be