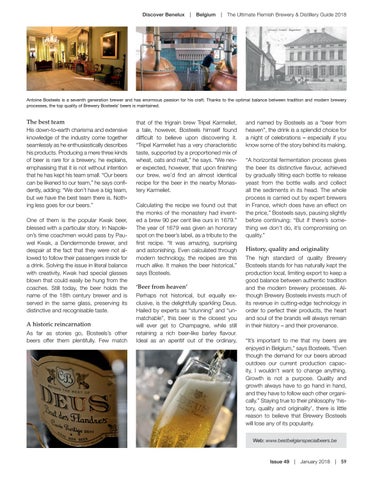 Antoine Bosteels is a seventh generation brewer and has enormous passion for his craft. Thanks to the optimal balance between tradition and modern brewery processes, the top quality of Brewery Bosteels’ beers is maintained.

The best team His down-to-earth charisma and extensive knowledge of the industry come together seamlessly as he enthusiastically describes his products. Producing a mere three kinds of beer is rare for a brewery, he explains, emphasising that it is not without intention that he has kept his team small. “Our beers can be likened to our team,” he says confidently, adding: “We don’t have a big team, but we have the best team there is. Nothing less goes for our beers.” One of them is the popular Kwak beer, blessed with a particular story. In Napoleon’s time coachmen would pass by Pauwel Kwak, a Dendermonde brewer, and despair at the fact that they were not allowed to follow their passengers inside for a drink. Solving the issue in literal balance with creativity, Kwak had special glasses blown that could easily be hung from the coaches. Still today, the beer holds the name of the 18th century brewer and is served in the same glass, preserving its distinctive and recognisable taste.

A historic reincarnation As far as stories go, Bosteels’s other beers offer them plentifully. Few match

that of the trigrain brew Tripel Karmeliet, a tale, however, Bosteels himself found difficult to believe upon discovering it. “Tripel Karmeliet has a very characteristic taste, supported by a proportioned mix of wheat, oats and malt,” he says. “We never expected, however, that upon finishing our brew, we’d find an almost identical recipe for the beer in the nearby Monastery Karmeliet. Calculating the recipe we found out that the monks of the monastery had invented a brew 90 per cent like ours in 1679.” The year of 1679 was given an honorary spot on the beer’s label, as a tribute to the first recipe. “It was amazing, surprising and astonishing. Even calculated through modern technology, the recipes are this much alike. It makes the beer historical,” says Bosteels.

‘Beer from heaven’ Perhaps not historical, but equally exclusive, is the delightfully sparkling Deus. Hailed by experts as “stunning” and “unmatchable”, this beer is the closest you will ever get to Champagne, while still retaining a rich beer-like barley flavour. Ideal as an aperitif out of the ordinary,

and named by Bosteels as a “beer from heaven”, the drink is a splendid choice for a night of celebrations – especially if you know some of the story behind its making. “A horizontal fermentation process gives the beer its distinctive flavour, achieved by gradually tilting each bottle to release yeast from the bottle walls and collect all the sediments in its head. The whole process is carried out by expert brewers in France, which does have an effect on the price,” Bosteels says, pausing slightly before continuing: “But if there’s something we don’t do, it’s compromising on quality.”

History, quality and originality The high standard of quality Brewery Bosteels stands for has naturally kept the production local, limiting export to keep a good balance between authentic tradition and the modern brewery processes. Although Brewery Bosteels invests much of its revenue in cutting-edge technology in order to perfect their products, the heart and soul of the brands will always remain in their history – and their provenance. “It’s important to me that my beers are enjoyed in Belgium,” says Bosteels. “Even though the demand for our beers abroad outdoes our current production capacity, I wouldn’t want to change anything. Growth is not a purpose. Quality and growth always have to go hand in hand, and they have to follow each other organically.” Staying true to their philosophy ‘history, quality and originality’, there is little reason to believe that Brewery Bosteels will lose any of its popularity. Web: www.bestbelgianspecialbeers.be