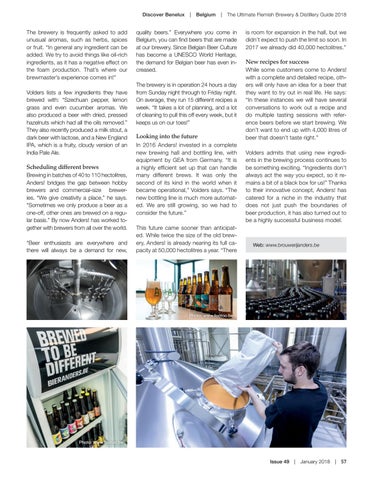 The brewery is frequently asked to add unusual aromas, such as herbs, spices or fruit. “In general any ingredient can be added. We try to avoid things like oil-rich ingredients, as it has a negative effect on the foam production. That’s where our brewmaster’s experience comes in!” Volders lists a few ingredients they have brewed with: “Szechuan pepper, lemon grass and even cucumber aromas. We also produced a beer with dried, pressed hazelnuts which had all the oils removed.” They also recently produced a milk stout, a dark beer with lactose, and a New England IPA, which is a fruity, cloudy version of an India Pale Ale.

Scheduling different brews Brewing in batches of 40 to 110 hectolitres, Anders! bridges the gap between hobby brewers and commercial-size breweries. “We give creativity a place,” he says. “Sometimes we only produce a beer as a one-off, other ones are brewed on a regular basis.” By now Anders! has worked together with brewers from all over the world. “Beer enthusiasts are everywhere and there will always be a demand for new,

quality beers.” Everywhere you come in Belgium, you can find beers that are made at our brewery. Since Belgian Beer Culture has become a UNESCO World Heritage, the demand for Belgian beer has even increased. The brewery is in operation 24 hours a day from Sunday night through to Friday night. On average, they run 15 different recipes a week. “It takes a lot of planning, and a lot of cleaning to pull this off every week, but it keeps us on our toes!”

Looking into the future In 2016 Anders! invested in a complete new brewing hall and bottling line, with equipment by GEA from Germany. “It is a highly efficient set up that can handle many different brews. It was only the second of its kind in the world when it became operational,” Volders says. “The new bottling line is much more automated. We are still growing, so we had to consider the future.” This future came sooner than anticipated. While twice the size of the old brewery, Anders! is already nearing its full capacity at 50,000 hectolitres a year. “There

New recipes for success While some customers come to Anders! with a complete and detailed recipe, others will only have an idea for a beer that they want to try out in real life. He says: “In these instances we will have several conversations to work out a recipe and do multiple tasting sessions with reference beers before we start brewing. We don’t want to end up with 4,000 litres of beer that doesn’t taste right.” Volders admits that using new ingredients in the brewing process continues to be something exciting. “Ingredients don’t always act the way you expect, so it remains a bit of a black box for us!” Thanks to their innovative concept, Anders! has catered for a niche in the industry that does not just push the boundaries of beer production, it has also turned out to be a highly successful business model.