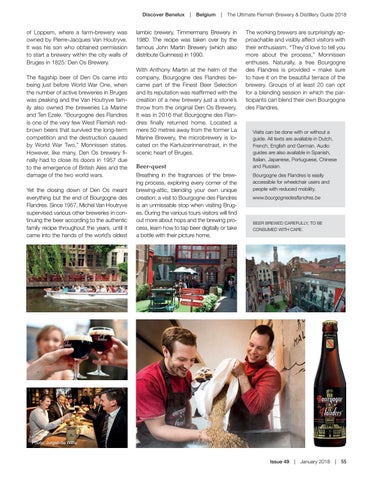 of Loppem, where a farm-brewery was owned by Pierre-Jacques Van Houtryve. It was his son who obtained permission to start a brewery within the city walls of Bruges in 1825: Den Os Brewery. The flagship beer of Den Os came into being just before World War One, when the number of active breweries in Bruges was peaking and the Van Houtryve family also owned the breweries La Marine and Ten Ezele. “Bourgogne des Flandres is one of the very few West Flemish redbrown beers that survived the long-term competition and the destruction caused by World War Two,” Monnissen states. However, like many, Den Os brewery finally had to close its doors in 1957 due to the emergence of British Ales and the damage of the two world wars. Yet the closing down of Den Os meant everything but the end of Bourgogne des Flandres. Since 1957, Michel Van Houtryve supervised various other breweries in continuing the beer according to the authentic family recipe throughout the years, until it came into the hands of the world’s oldest

lambic brewery, Timmermans Brewery in 1980. The recipe was taken over by the famous John Martin Brewery (which also distribute Guinness) in 1990. With Anthony Martin at the helm of the company, Bourgogne des Flandres became part of the Finest Beer Selection and its reputation was reaffirmed with the creation of a new brewery just a stone’s throw from the original Den Os Brewery. It was in 2016 that Bourgogne des Flandres finally returned home. Located a mere 50 metres away from the former La Marine Brewery, the microbrewery is located on the Kartuizerinnenstraat, in the scenic heart of Bruges.

Beer-quest Breathing in the fragrances of the brewing process, exploring every corner of the brewing-attic, blending your own unique creation: a visit to Bourgogne des Flandres is an unmissable stop when visiting Bruges. During the various tours visitors will find out more about hops and the brewing process, learn how to tap beer digitally or take a bottle with their picture home.

The working brewers are surprisingly approachable and visibly affect visitors with their enthusiasm. “They’d love to tell you more about the process,” Monnissen enthuses. Naturally, a free Bourgogne des Flandres is provided – make sure to have it on the beautiful terrace of the brewery. Groups of at least 20 can opt for a blending session in which the participants can blend their own Bourgogne des Flandres.

Visits can be done with or without a guide. All texts are available in Dutch, French, English and German. Audio guides are also available in Spanish, Italian, Japanese, Portuguese, Chinese and Russian. Bourgogne des Flandres is easily accessible for wheelchair users and people with reduced mobility. www.bourgognedesflandres.be

BEER BREWED CAREFULLY, TO BE CONSUMED WITH CARE.