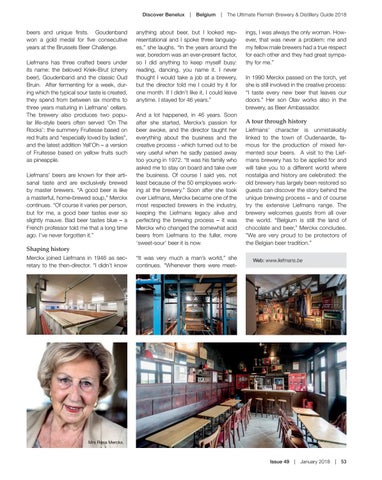 beers and unique firsts. Goudenband won a gold medal for five consecutive years at the Brussels Beer Challenge. Liefmans has three crafted beers under its name: the beloved Kriek-Brut (cherry beer), Goudenband and the classic Oud Bruin. After fermenting for a week, during which the typical sour taste is created, they spend from between six months to three years maturing in Liefmans’ cellars. The brewery also produces two popular life-style beers often served ‘On The Rocks’: the summery Fruitesse based on red fruits and “especially loved by ladies”, and the latest addition Yell’Oh – a version of Fruitesse based on yellow fruits such as pineapple. Liefmans’ beers are known for their artisanal taste and are exclusively brewed by master brewers. “A good beer is like a masterful, home-brewed soup,” Merckx continues. “Of course it varies per person, but for me, a good beer tastes ever so slightly mauve. Bad beer tastes blue – a French professor told me that a long time ago. I’ve never forgotten it.”

Shaping history Merckx joined Liefmans in 1946 as secretary to the then-director. “I didn’t know

anything about beer, but I looked representational and I spoke three languages,” she laughs. “In the years around the war, boredom was an ever-present factor, so I did anything to keep myself busy: reading, dancing, you name it. I never thought I would take a job at a brewery, but the director told me I could try it for one month. If I didn’t like it, I could leave anytime. I stayed for 46 years.” And a lot happened, in 46 years. Soon after she started, Merckx’s passion for beer awoke, and the director taught her everything about the business and the creative process - which turned out to be very useful when he sadly passed away too young in 1972. “It was his family who asked me to stay on board and take over the business. Of course I said yes, not least because of the 50 employees working at the brewery.” Soon after she took over Liefmans, Merckx became one of the most respected brewers in the industry, keeping the Liefmans legacy alive and perfecting the brewing process – it was Merckx who changed the somewhat acid beers from Liefmans to the fuller, more ‘sweet-sour’ beer it is now. “It was very much a man’s world,” she continues. “Whenever there were meet-

ings, I was always the only woman. However, that was never a problem: me and my fellow male brewers had a true respect for each other and they had great sympathy for me.” In 1990 Merckx passed on the torch, yet she is still involved in the creative process: “I taste every new beer that leaves our doors.” Her son Olav works also in the brewery, as Beer Ambassador.

A tour through history Liefmans’ character is unmistakably linked to the town of Oudenaarde, famous for the production of mixed fermented sour beers. A visit to the Liefmans brewery has to be applied for and will take you to a different world where nostalgia and history are celebrated: the old brewery has largely been restored so guests can discover the story behind the unique brewing process – and of course try the extensive Liefmans range. The brewery welcomes guests from all over the world. “Belgium is still the land of chocolate and beer,” Merckx concludes. “We are very proud to be protectors of the Belgian beer tradition.” Web: www.liefmans.be