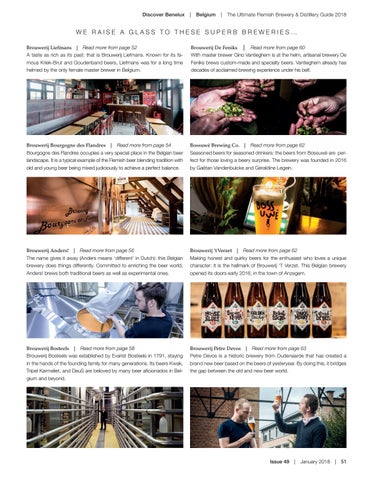 WE RAISE A GLASS TO THESE SUPERB BREWERIES… Brouwerij Liefmans  |  Read more from page 52 A taste as rich as its past: that is Brouwerij Liefmans. Known for its famous Kriek-Brut and Goudenband beers, Liefmans was for a long time helmed by the only female master brewer in Belgium.

Bossuwé Brewing Co. | Read more from page 62 Seasoned beers for seasoned drinkers: the beers from Bossuwé are perfect for those loving a beery surprise. The brewery was founded in 2016 by Gaëtan Vandenbulcke and Géraldine Legein.

Brouwerij Anders! | Read more from page 56 The name gives it away (Anders means ‘different’ in Dutch): this Belgian brewery does things differently. Committed to enriching the beer world, Anders! brews both traditional beers as well as experimental ones.

Brouwerij ’t Verzet | Read more from page 62 Making honest and quirky beers for the enthusiast who loves a unique character: it is the hallmark of Brouwerij ‘T Verzet. This Belgian brewery opened its doors early 2016, in the town of Anzegem.

Brouwerij Bosteels | Read more from page 58 Brouwerij Bosteels was established by Evarist Bosteels in 1791, staying in the hands of the founding family for many generations. Its beers Kwak, Tripel Karmeliet, and DeuS are beloved by many beer aficionados in Belgium and beyond.

Brouwerij Petre Devos | Read more from page 63 Petre Devos is a historic brewery from Oudenaarde that has created a brand new beer based on the beers of yesteryear. By doing this, it bridges the gap between the old and new beer world.