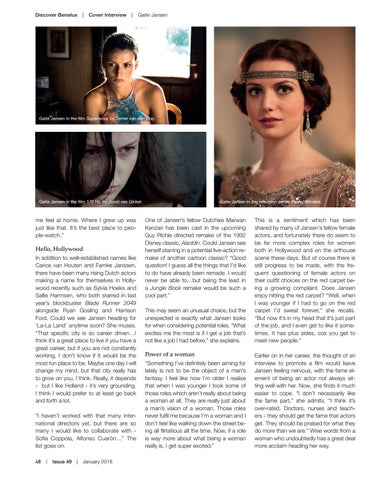 Gaite Jansen in the film 170 Hz, by Joost van Ginkel.

me feel at home. Where I grew up was just like that. It’s the best place to people-watch.”

Hello, Hollywood In addition to well-established names like Carice van Houten and Famke Janssen, there have been many rising Dutch actors making a name for themselves in Hollywood recently such as Sylvia Hoeks and Sallie Harmsen, who both starred in last year’s blockbuster Blade Runner 2049 alongside Ryan Gosling and Harrison Ford. Could we see Jansen heading for ‘La-La Land’ anytime soon? She muses.  “That specific city is so career driven…I think it’s a great place to live if you have a great career, but if you are not constantly working, I don’t know if it would be the most fun place to be. Maybe one day I will change my mind, but that city really has to grow on you, I think. Really, it depends -  but I like Holland - it’s very grounding. I think I would prefer to at least go back and forth a lot. “I haven’t worked with that many international directors yet, but there are so many I would like to collaborate with Sofia Coppola, Alfonso Cuarón…” The list goes on. 48  |  Issue 49  |  January 2018

One of Jansen’s fellow Dutchies Marwan Kenzari has been cast in the upcoming Guy Richie directed remake of the 1992 Disney classic, Aladdin. Could Jansen see herself starring in a potential live-action remake of another cartoon classic? “Good question! I guess all the things that I’d like to do have already been remade. I would never be able to…but being the lead in a Jungle Book remake would be such a cool part.” This may seem an unusual choice, but the unexpected is exactly what Jansen looks for when considering potential roles. “What excites me the most is if I get a job that’s not like a job I had before,” she explains.

Power of a woman “Something I’ve definitely been aiming for lately is not to be the object of a man’s fantasy. I feel like now I’m older I realise that when I was younger I took some of those roles which aren’t really about being a woman at all. They are really just about a man’s vision of a woman. Those roles never fulfil me because I’m a woman and I don’t feel like walking down the street being all flirtatious all the time. Now, if a role is way more about what being a woman really is, I get super excited.”

This is a sentiment which has been shared by many of Jansen’s fellow female actors, and fortunately there do seem to be far more complex roles for women both in Hollywood and on the arthouse scene these days. But of course there is still progress to be made, with the frequent questioning of female actors on their outfit choices on the red carpet being a growing complaint. Does Jansen enjoy hitting the red carpet? “Well, when I was younger if I had to go on the red carpet I’d sweat forever,” she recalls. “But now it’s in my head that it’s just part of the job, and I even get to like it sometimes. It has plus sides, cos you get to meet new people.” Earlier on in her career, the thought of an interview to promote a film would leave Jansen feeling nervous, with the fame element of being an actor not always sitting well with her. Now, she finds it much easier to cope. “I don’t necessarily like the fame part,” she admits. “I think it’s over-rated. Doctors, nurses and teachers - they should get the fame that actors get. They should be praised for what they do more than we are.” Wise words from a woman who undoubtedly has a great deal more acclaim heading her way.