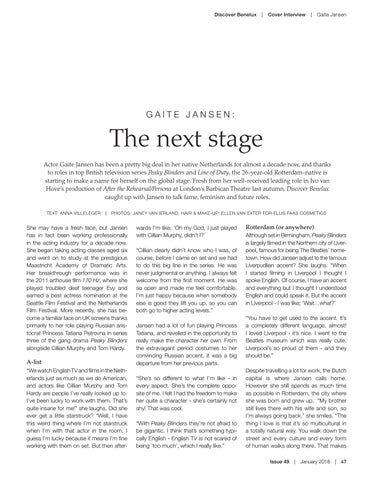 The next stage Actor Gaite Jansen has been a pretty big deal in her native Netherlands for almost a decade now, and thanks to roles in top British television series Peaky Blinders and Line of Duty, the 26-year-old Rotterdam-native is starting to make a name for herself on the global stage. Fresh from her well-received leading role in Ivo van Hove’s production of After the Rehearsal/Persona at London’s Barbican Theatre last autumn, Discover Benelux caught up with Jansen to talk fame, feminism and future roles. TEXT: ANNA VILLELEGER  |  PHOTOS: JANEY VAN IERLAND, HAIR & MAKE-UP: ELLEN VAN EXTER FOR ELLIS FAAS COSMETICS

She may have a fresh face, but Jansen has in fact been working professionally in the acting industry for a decade now. She began taking acting classes aged six and went on to study at the prestigious Maastricht Academy of Dramatic Arts. Her breakthrough performance was in the 2011 arthouse film 170 Hz, where she played troubled deaf teenager Evy and earned a best actress nomination at the Seattle Film Festival and the Netherlands Film Festival. More recently, she has become a familiar face on UK screens thanks primarily to her role playing Russian aristocrat Princess Tatiana Petrovna in series three of the gang drama Peaky Blinders alongside Cillian Murphy and Tom Hardy.

A-list “We watch English TV and films in the Netherlands just as much as we do American, and actors like Cillian Murphy and Tom Hardy are people I’ve really looked up to. I’ve been lucky to work with them. That’s quite insane for me!” she laughs. Did she ever get a little starstruck? “Well, I have this weird thing where I’m not starstruck when I’m with that actor in the room. I guess I’m lucky because it means I’m fine working with them on set. But then after-

wards I’m like; ‘Oh my God, I just played with Cillian Murphy, didn’t I?’ “Cillian clearly didn’t know who I was, of course, before I came on set and we had to do this big line in the series. He was never judgmental or anything. I always felt welcome from the first moment. He was so open and made me feel comfortable. I’m just happy because when somebody else is good they lift you up, so you can both go to higher acting levels.” Jansen had a lot of fun playing Princess Tatiana, and revelled in the opportunity to really make the character her own. From the extravagant period costumes to her convincing Russian accent, it was a big departure from her previous parts.  “She’s so different to what I’m like - in every aspect. She’s the complete opposite of me. I felt I had the freedom to make her quite a character - she’s certainly not shy! That was cool. “With Peaky Blinders they’re not afraid to be gigantic. I think that’s something typically English - English TV is not scared of being ‘too much’, which I really like.”

Rotterdam (or anywhere) Although set in Birmingham, Peaky Blinders is largely filmed in the Northern city of Liverpool, famous for being The Beatles’ hometown. How did Jansen adjust to the famous Liverpudlian accent? She laughs. “When I started filming in Liverpool I thought I spoke English. Of course, I have an accent and everything but I thought I understood English and could speak it. But the accent in Liverpool - I was like; ‘Wait…what?’ “You have to get used to the accent. It’s a completely different language, almost! I loved Liverpool - it’s nice. I went to the Beatles museum which was really cute. Liverpool’s so proud of them - and they should be.” Despite travelling a lot for work, the Dutch capital is where Jansen calls home. However she still spends as much time as possible in Rotterdam, the city where she was born and grew up.  “My brother still lives there with his wife and son, so I’m always going back,” she smiles. “The thing I love is that it’s so multicultural in a totally natural way. You walk down the street and every culture and every form of human walks along there. That makes Issue 49  |  January 2018  |  47