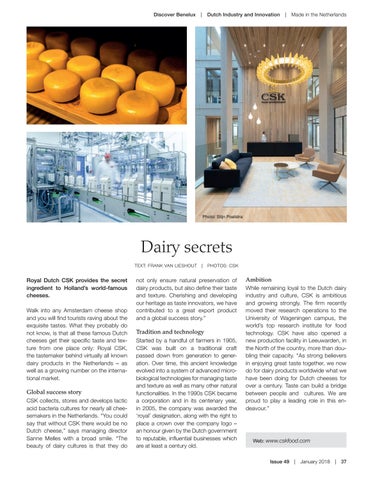 Royal Dutch CSK provides the secret ingredient to Holland’s world-famous cheeses. Walk into any Amsterdam cheese shop and you will find tourists raving about the exquisite tastes. What they probably do not know, is that all these famous Dutch cheeses get their specific taste and texture from one place only: Royal CSK, the tastemaker behind virtually all known dairy products in the Netherlands – as well as a growing number on the international market.

Global success story CSK collects, stores and develops lactic acid bacteria cultures for nearly all cheesemakers in the Netherlands. “You could say that without CSK there would be no Dutch cheese,” says managing director Sanne Melles with a broad smile. “The beauty of dairy cultures is that they do

not only ensure natural preservation of dairy products, but also define their taste and texture. Cherishing and developing our heritage as taste innovators, we have contributed to a great export product and a global success story.”

Tradition and technology Started by a handful of farmers in 1905, CSK was built on a traditional craft passed down from generation to generation. Over time, this ancient knowledge evolved into a system of advanced microbiological technologies for managing taste and texture as well as many other natural functionalities. In the 1990s CSK became a corporation and in its centenary year, in 2005, the company was awarded the ‘royal’ designation, along with the right to place a crown over the company logo – an honour given by the Dutch government to reputable, influential businesses which are at least a century old.

Ambition While remaining loyal to the Dutch dairy industry and culture, CSK is ambitious and growing strongly. The firm recently moved their research operations to the University of Wageningen campus, the world’s top research institute for food technology. CSK have also opened a new production facility in Leeuwarden, in the North of the country, more than doubling their capacity. “As strong believers in enjoying great taste together, we now do for dairy products worldwide what we have been doing for Dutch cheeses for over a century. Taste can build a bridge between people and cultures. We are proud to play a leading role in this endeavour.”