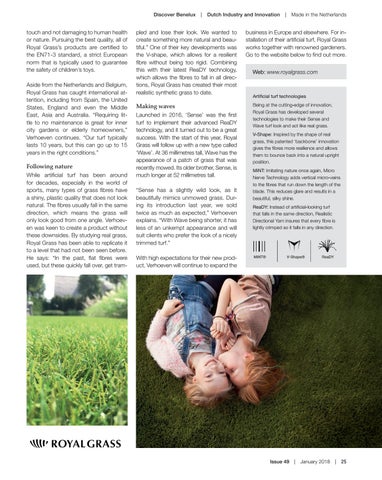 touch and not damaging to human health or nature. Pursuing the best quality, all of Royal Grass’s products are certified to the EN71-3 standard, a strict European norm that is typically used to guarantee the safety of children’s toys. Aside from the Netherlands and Belgium, Royal Grass has caught international attention, including from Spain, the United States, England and even the Middle East, Asia and Australia. “Requiring little to no maintenance is great for inner city gardens or elderly homeowners,” Verhoeven continues. “Our turf typically lasts 10 years, but this can go up to 15 years in the right conditions.”

Following nature While artificial turf has been around for decades, especially in the world of sports, many types of grass fibres have a shiny, plastic quality that does not look natural. The fibres usually fall in the same direction, which means the grass will only look good from one angle. Verhoeven was keen to create a product without these downsides. By studying real grass, Royal Grass has been able to replicate it to a level that had not been seen before. He says: “In the past, flat fibres were used, but these quickly fall over, get tram-

pled and lose their look. We wanted to create something more natural and beautiful.” One of their key developments was the V-shape, which allows for a resilient fibre without being too rigid. Combining this with their latest ReaDY technology, which allows the fibres to fall in all directions, Royal Grass has created their most realistic synthetic grass to date.

Making waves Launched in 2016, ‘Sense’ was the first turf to implement their advanced ReaDY technology, and it turned out to be a great success. With the start of this year, Royal Grass will follow up with a new type called ‘Wave’. At 36 millimetres tall, Wave has the appearance of a patch of grass that was recently mowed. Its older brother, Sense, is much longer at 52 millimetres tall. “Sense has a slightly wild look, as it beautifully mimics unmowed grass. During its introduction last year, we sold twice as much as expected,” Verhoeven explains. “With Wave being shorter, it has less of an unkempt appearance and will suit clients who prefer the look of a nicely trimmed turf.”

business in Europe and elsewhere. For installation of their artificial turf, Royal Grass works together with renowned gardeners. Go to the website below to find out more. Web: www.royalgrass.com

Artificial turf technologies Being at the cutting-edge of innovation, Royal Grass has developed several technologies to make their Sense and Wave turf look and act like real grass. V-Shape: Inspired by the shape of real grass, this patented ‘backbone’ innovation gives the fibres more resilience and allows them to bounce back into a natural upright position. MiNT: Imitating nature once again, Micro Nerve Technology adds vertical micro-veins to the fibres that run down the length of the blade. This reduces glare and results in a beautiful, silky shine. ReaDY: Instead of artificial-looking turf that falls in the same direction, Realistic Directional Yarn insures that every fibre is lightly crimped so it falls in any direction.

With high expectations for their new product, Verhoeven will continue to expand the