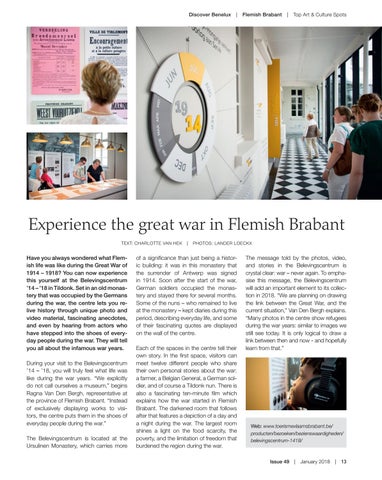 Have you always wondered what Flemish life was like during the Great War of 1914 – 1918? You can now experience this yourself at the Belevingscentrum ’14 – ’18 in Tildonk. Set in an old monastery that was occupied by the Germans during the war, the centre lets you relive history through unique photo and video material, fascinating anecdotes, and even by hearing from actors who have stepped into the shoes of everyday people during the war. They will tell you all about the infamous war years. During your visit to the Belevingscentrum ’14 – ’18, you will truly feel what life was like during the war years. “We explicitly do not call ourselves a museum,” begins Ragna Van Den Bergh, representative at the province of Flemish Brabant. “Instead of exclusively displaying works to visitors, the centre puts them in the shoes of everyday people during the war.” The Belevingscentrum is located at the Ursulinen Monastery, which carries more

of a significance than just being a historic building: it was in this monastery that the surrender of Antwerp was signed in 1914. Soon after the start of the war, German soldiers occupied the monastery and stayed there for several months. Some of the nuns – who remained to live at the monastery – kept diaries during this period, describing everyday life, and some of their fascinating quotes are displayed on the wall of the centre. Each of the spaces in the centre tell their own story. In the first space, visitors can meet twelve different people who share their own personal stories about the war: a farmer, a Belgian General, a German soldier, and of course a Tildonk nun. There is also a fascinating ten-minute film which explains how the war started in Flemish Brabant. The darkened room that follows after that features a depiction of a day and a night during the war. The largest room shines a light on the food scarcity, the poverty, and the limitation of freedom that burdened the region during the war.

The message told by the photos, video, and stories in the Belevingscentrum is crystal clear: war – never again. To emphasise this message, the Belevingscentrum will add an important element to its collection in 2018. “We are planning on drawing the link between the Great War, and the current situation,” Van Den Bergh explains. “Many photos in the centre show refugees during the war years: similar to images we still see today. It is only logical to draw a link between then and now - and hopefully learn from that.”