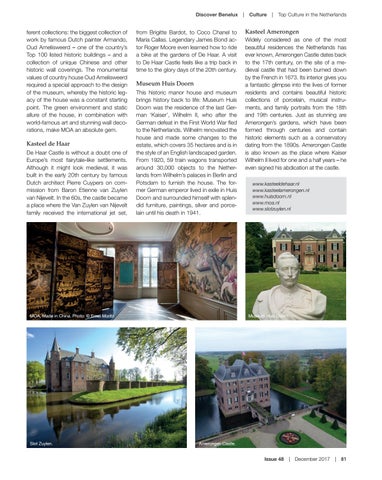 ferent collections: the biggest collection of work by famous Dutch painter Armando, Oud Amelisweerd – one of the country’s Top 100 listed historic buildings – and a collection of unique Chinese and other historic wall coverings. The monumental values of country house Oud Amelisweerd required a special approach to the design of the museum, whereby the historic legacy of the house was a constant starting point. The green environment and static allure of the house, in combination with world-famous art and stunning wall decorations, make MOA an absolute gem.

Kasteel de Haar De Haar Castle is without a doubt one of Europe’s most fairytale-like settlements. Although it might look medieval, it was built in the early 20th century by famous Dutch architect Pierre Cuypers on commission from Baron Etienne van Zuylen van Nijevelt. In the 60s, the castle became a place where the Van Zuylen van Nijevelt family received the international jet set,

from Brigitte Bardot, to Coco Chanel to Maria Callas. Legendary James Bond actor Roger Moore even learned how to ride a bike at the gardens of De Haar. A visit to De Haar Castle feels like a trip back in time to the glory days of the 20th century.

Museum Huis Doorn This historic manor house and museum brings history back to life: Museum Huis Doorn was the residence of the last German ‘Kaiser’, Wilhelm II, who after the German defeat in the First World War fled to the Netherlands. Wilhelm renovated the house and made some changes to the estate, which covers 35 hectares and is in the style of an English landscaped garden. From 1920, 59 train wagons transported around 30,000 objects to the Netherlands from Wilhelm’s palaces in Berlin and Potsdam to furnish the house. The former German emperor lived in exile in Huis Doorn and surrounded himself with splendid furniture, paintings, silver and porcelain until his death in 1941.

Kasteel Amerongen Widely considered as one of the most beautiful residences the Netherlands has ever known, Amerongen Castle dates back to the 17th century, on the site of a medieval castle that had been burned down by the French in 1673. Its interior gives you a fantastic glimpse into the lives of former residents and contains beautiful historic collections of porcelain, musical instruments, and family portraits from the 18th and 19th centuries. Just as stunning are Amerongen’s gardens, which have been formed through centuries and contain historic elements such as a conservatory dating from the 1890s. Amerongen Castle is also known as the place where Kaiser Wilhelm II lived for one and a half years – he even signed his abdication at the castle. www.kasteeldehaar.nl www.kasteelamerongen.nl www.huisdoorn.nl www.moa.nl www.slotzuylen.nl