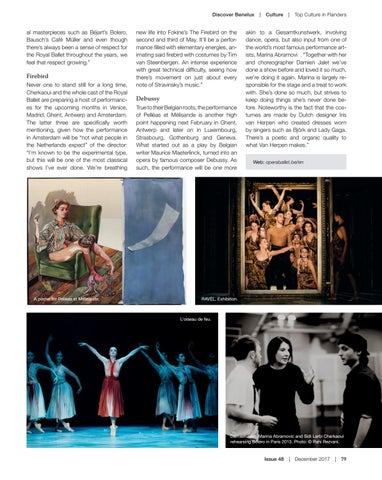 al masterpieces such as Béjart’s Bolero, Bausch’s Café Müller and even though there’s always been a sense of respect for the Royal Ballet throughout the years, we feel that respect growing.”

Firebird Never one to stand still for a long time, Cherkaoui and the whole cast of the Royal Ballet are preparing a host of performances for the upcoming months in Venice, Madrid, Ghent, Antwerp and Amsterdam. The latter three are specifically worth mentioning, given how the performance in Amsterdam will be “not what people in the Netherlands expect” of the director: “I’m known to be the experimental type, but this will be one of the most classical shows I’ve ever done. We’re breathing

A poster for Pelléas et Mélisande.

new life into Fokine’s The Firebird on the second and third of May. It’ll be a performance filled with elementary energies, animating said firebird with costumes by Tim van Steenbergen. An intense experience with great technical difficulty, seeing how there’s movement on just about every note of Stravinsky’s music.”

Debussy True to their Belgian roots, the performance of Pelléas et Mélisande is another high point happening next February in Ghent, Antwerp and later on in Luxembourg, Strasbourg, Gothenburg and Geneva. What started out as a play by Belgian writer Maurice Maeterlinck, turned into an opera by famous composer Debussy. As such, the performance will be one more

akin to a Gesamtkunstwerk, involving dance, opera, but also input from one of the world’s most famous performance artists, Marina Abramović. “Together with her and choreographer Damien Jalet we’ve done a show before and loved it so much, we’re doing it again. Marina is largely responsible for the stage and a treat to work with. She’s done so much, but strives to keep doing things she’s never done before. Noteworthy is the fact that the costumes are made by Dutch designer Iris van Herpen who created dresses worn by singers such as Björk and Lady Gaga. There’s a poetic and organic quality to what Van Herpen makes.” Web: operaballet.be/en