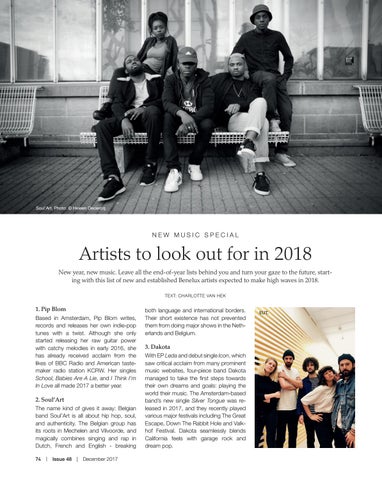 Artists to look out for in 2018 New year, new music. Leave all the end-of-year lists behind you and turn your gaze to the future, starting with this list of new and established Benelux artists expected to make high waves in 2018. TEXT: CHARLOTTE VAN HEK

1. Pip Blom Based in Amsterdam, Pip Blom writes, records and releases her own indie-pop tunes with a twist. Although she only started releasing her raw guitar power with catchy melodies in early 2016, she has already received acclaim from the likes of BBC Radio and American tastemaker radio station KCRW. Her singles School, Babies Are A Lie, and I Think I’m In Love all made 2017 a better year.

2. Soul’Art The name kind of gives it away: Belgian band Soul’Art is all about hip hop, soul, and authenticity. The Belgian group has its roots in Mechelen and Vilvoorde, and magically combines singing and rap in Dutch, French and English - breaking 74  |  Issue 48  |  December 2017

both language and international borders. Their short existence has not prevented them from doing major shows in the Netherlands and Belgium.

3. Dakota With EP Leda and debut single Icon, which saw critical acclaim from many prominent music websites, four-piece band Dakota managed to take the first steps towards their own dreams and goals: playing the world their music. The Amsterdam-based band’s new single Silver Tongue was released in 2017, and they recently played various major festivals including The Great Escape, Down The Rabbit Hole and Valkhof Festival. Dakota seamlessly blends California feels with garage rock and dream pop.