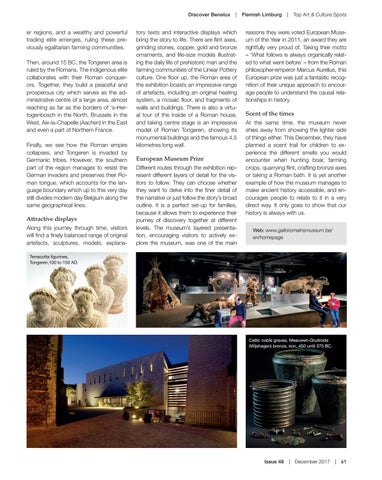 er regions, and a wealthy and powerful trading elite emerges, ruling these previously egalitarian farming communities. Then, around 15 BC, the Tongeren area is ruled by the Romans. The indigenous elite collaborates with their Roman conquerors. Together, they build a peaceful and prosperous city which serves as the administrative centre of a large area, almost reaching as far as the borders of ‘s-Hertogenbosch in the North, Brussels in the West, Aix-la-Chapelle (Aachen) in the East and even a part of Northern France. Finally, we see how the Roman empire collapses, and Tongeren is invaded by Germanic tribes. However, the southern part of the region manages to resist the German invaders and preserves their Roman tongue, which accounts for the language boundary which up to this very day still divides modern day Belgium along the same geographical lines.

Attractive displays Along this journey through time, visitors will find a finely balanced range of original artefacts, sculptures, models, explana-

tory texts and interactive displays which bring the story to life. There are flint axes, grinding stones, copper, gold and bronze ornaments, and life-size models illustrating the daily life of prehistoric man and the farming communities of the Linear Pottery culture. One floor up, the Roman area of the exhibition boasts an impressive range of artefacts, including an original heating system, a mosaic floor, and fragments of walls and buildings. There is also a virtual tour of the inside of a Roman house, and taking centre stage is an impressive model of Roman Tongeren, showing its monumental buildings and the famous 4.5 kilometres long wall.

European Museum Prize Different routes through the exhibition represent different layers of detail for the visitors to follow. They can choose whether they want to delve into the finer detail of the narrative or just follow the story’s broad outline. It is a perfect set-up for families, because it allows them to experience their journey of discovery together at different levels. The museum’s layered presentation, encouraging visitors to actively explore the museum, was one of the main

reasons they were voted European Museum of the Year in 2011, an award they are rightfully very proud of. Taking their motto – ‘What follows is always organically related to what went before’ – from the Roman philosopher-emperor Marcus Aurelius, this European prize was just a fantastic recognition of their unique approach to encourage people to understand the causal relationships in history.

Scent of the times At the same time, the museum never shies away from showing the lighter side of things either. This December, they have planned a scent trail for children to experience the different smells you would encounter when hunting boar, farming crops, quarrying flint, crafting bronze axes or taking a Roman bath. It is yet another example of how the museum manages to make ancient history accessible, and encourages people to relate to it in a very direct way. It only goes to show that our history is always with us. Web: www.galloromeinsmuseum.be/ en/homepage