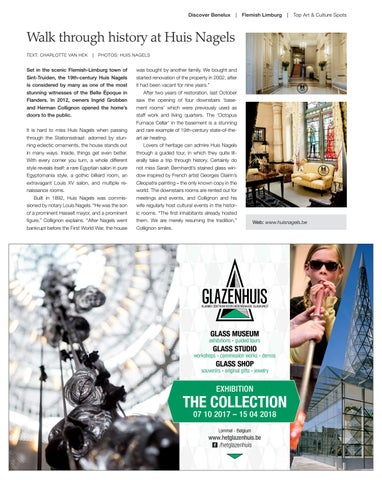 Set in the scenic Flemish-Limburg town of Sint-Truiden, the 19th-century Huis Nagels is considered by many as one of the most stunning witnesses of the Belle Époque in Flanders. In 2012, owners Ingrid Grobben and Herman Collignon opened the home’s doors to the public. It is hard to miss Huis Nagels when passing through the Stationsstraat: adorned by stunning eclectic ornaments, the house stands out in many ways. Inside, things get even better. With every corner you turn, a whole different style reveals itself: a rare Egyptian salon in pure Egyptomania style, a gothic billiard room, an extravagant Louis XV salon, and multiple renaissance rooms. Built in 1892, Huis Nagels was commissioned by notary Louis Nagels. “He was the son of a prominent Hasselt mayor, and a prominent figure,” Collignon explains. “After Nagels went bankrupt before the First World War, the house

was bought by another family. We bought and started renovation of the property in 2002, after it had been vacant for nine years.” After two years of restoration, last October saw the opening of four downstairs ‘basement rooms’ which were previously used as staff work and living quarters. The ‘Octopus Furnace Cellar’ in the basement is a stunning and rare example of 19th-century state-of-theart air heating. Lovers of heritage can admire Huis Nagels through a guided tour, in which they quite literally take a trip through history. Certainly do not miss Sarah Bernhardt’s stained glass window inspired by French artist Georges Clairin’s Cleopatra painting – the only known copy in the world. The downstairs rooms are rented out for meetings and events, and Collignon and his wife regularly host cultural events in the historic rooms. “The first inhabitants already hosted them. We are merely resuming the tradition,” Collignon smiles.