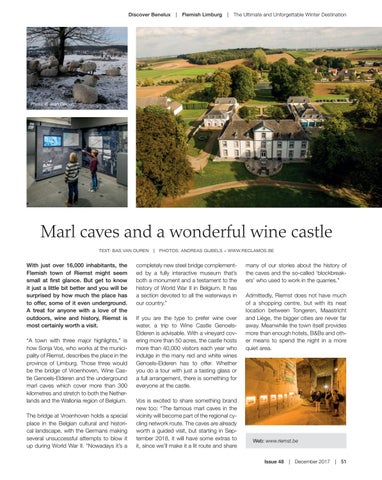 With just over 16,000 inhabitants, the Flemish town of Riemst might seem small at first glance. But get to know it just a little bit better and you will be surprised by how much the place has to offer, some of it even underground. A treat for anyone with a love of the outdoors, wine and history, Riemst is most certainly worth a visit. “A town with three major highlights,” is how Sonja Vos, who works at the municipality of Riemst, describes the place in the province of Limburg. Those three would be the bridge of Vroenhoven, Wine Castle Genoels-Elderen and the underground marl caves which cover more than 300 kilometres and stretch to both the Netherlands and the Wallonia region of Belgium. The bridge at Vroenhoven holds a special place in the Belgian cultural and historical landscape, with the Germans making several unsuccessful attempts to blow it up during World War II. “Nowadays it’s a

completely new steel bridge complemented by a fully interactive museum that’s both a monument and a testament to the history of World War II in Belgium. It has a section devoted to all the waterways in our country.” If you are the type to prefer wine over water, a trip to Wine Castle GenoelsElderen is advisable. With a vineyard covering more than 50 acres, the castle hosts more than 40,000 visitors each year who indulge in the many red and white wines Genoels-Elderen has to offer. Whether you do a tour with just a tasting glass or a full arrangement, there is something for everyone at the castle. Vos is excited to share something brand new too: “The famous marl caves in the vicinity will become part of the regional cycling network route. The caves are already worth a guided visit, but starting in September 2018, it will have some extras to it, since we’ll make it a lit route and share

many of our stories about the history of the caves and the so-called ‘blockbreakers’ who used to work in the quarries.” Admittedly, Riemst does not have much of a shopping centre, but with its neat location between Tongeren, Maastricht and Liège, the bigger cities are never far away. Meanwhile the town itself provides more than enough hotels, B&Bs and other means to spend the night in a more quiet area.