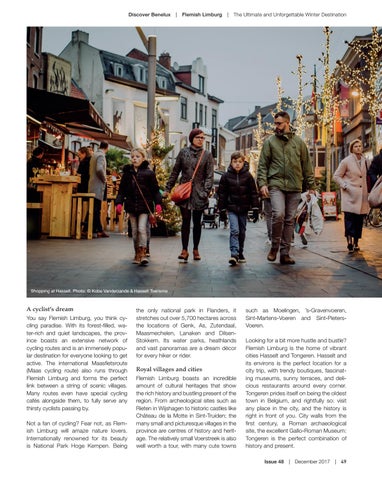 A cyclist’s dream You say Flemish Limburg, you think cycling paradise. With its forest-filled, water-rich and quiet landscapes, the province boasts an extensive network of cycling routes and is an immensely popular destination for everyone looking to get active. The international Maasfietsroute (Maas cycling route) also runs through Flemish Limburg and forms the perfect link between a string of scenic villages. Many routes even have special cycling cafés alongside them, to fully serve any thirsty cyclists passing by. Not a fan of cycling? Fear not, as Flemish Limburg will amaze nature lovers. Internationally renowned for its beauty is National Park Hoge Kempen. Being

the only national park in Flanders, it stretches out over 5,700 hectares across the locations of Genk, As, Zutendaal, Maasmechelen, Lanaken and DilsenStokkem. Its water parks, heathlands and vast panoramas are a dream décor for every hiker or rider.

Royal villages and cities Flemish Limburg boasts an incredible amount of cultural heritages that show the rich history and bustling present of the region. From archeological sites such as Rieten in Wijshagen to historic castles like Château de la Motte in Sint-Truiden; the many small and picturesque villages in the province are centres of history and heritage. The relatively small Voerstreek is also well worth a tour, with many cute towns

such as Moelingen, ’s-Gravenvoeren, Sint-Martens-Voeren and Sint-PietersVoeren. Looking for a bit more hustle and bustle? Flemish Limburg is the home of vibrant cities Hasselt and Tongeren. Hasselt and its environs is the perfect location for a city trip, with trendy boutiques, fascinating museums, sunny terraces, and delicious restaurants around every corner. Tongeren prides itself on being the oldest town in Belgium, and rightfully so: visit any place in the city, and the history is right in front of you. City walls from the first century, a Roman archaeological site, the excellent Gallo-Roman Museum: Tongeren is the perfect combination of history and present. Issue 48  |  December 2017  |  49