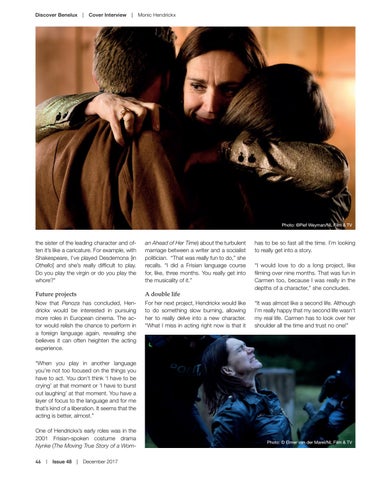 the sister of the leading character and often it’s like a caricature. For example, with Shakespeare, I’ve played Desdemona [in Othello] and she’s really difficult to play. Do you play the virgin or do you play the whore?”

an Ahead of Her Time) about the turbulent marriage between a writer and a socialist politician. “That was really fun to do,” she recalls. “I did a Frisian language course for, like, three months. You really get into the musicality of it.”

Now that Penoza has concluded, Hendrickx would be interested in pursuing more roles in European cinema. The actor would relish the chance to perform in a foreign language again, revealing she believes it can often heighten the acting experience.

For her next project, Hendrickx would like to do something slow burning, allowing her to really delve into a new character. “What I miss in acting right now is that it

has to be so fast all the time. I’m looking to really get into a story. “I would love to do a long project, like filming over nine months. That was fun in Carmen too, because I was really in the depths of a character,” she concludes. “It was almost like a second life. Although I’m really happy that my second life wasn’t my real life. Carmen has to look over her shoulder all the time and trust no one!”

“When you play in another language you’re not too focused on the things you have to act. You don’t think ‘I have to be crying’ at that moment or ‘I have to burst out laughing’ at that moment. You have a layer of focus to the language and for me that’s kind of a liberation. It seems that the acting is better, almost.” One of Hendrickx’s early roles was in the 2001 Frisian-spoken costume drama Nynke (The Moving True Story of a Wom46  |  Issue 48  |  December 2017