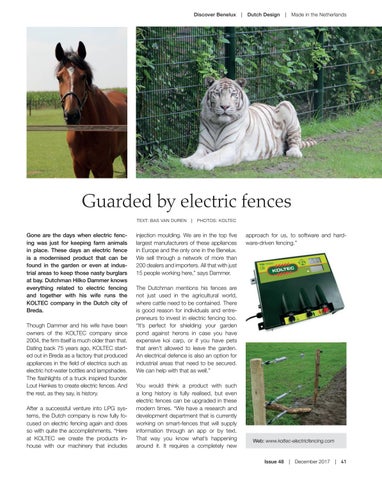 Gone are the days when electric fencing was just for keeping farm animals in place. These days an electric fence is a modernised product that can be found in the garden or even at industrial areas to keep those nasty burglars at bay. Dutchman Hilko Dammer knows everything related to electric fencing and together with his wife runs the KOLTEC company in the Dutch city of Breda. Though Dammer and his wife have been owners of the KOLTEC company since 2004, the firm itself is much older than that. Dating back 75 years ago, KOLTEC started out in Breda as a factory that produced appliances in the field of electrics such as electric hot-water bottles and lampshades. The flashlights of a truck inspired founder Lout Henkes to create electric fences. And the rest, as they say, is history. After a successful venture into LPG systems, the Dutch company is now fully focused on electric fencing again and does so with quite the accomplishments. “Here at KOLTEC we create the products inhouse with our machinery that includes

injection moulding. We are in the top five largest manufacturers of these appliances in Europe and the only one in the Benelux. We sell through a network of more than 200 dealers and importers. All that with just 15 people working here,” says Dammer.

approach for us, to software and hardware-driven fencing.”

The Dutchman mentions his fences are not just used in the agricultural world, where cattle need to be contained. There is good reason for individuals and entrepreneurs to invest in electric fencing too. “It’s perfect for shielding your garden pond against herons in case you have expensive koi carp, or if you have pets that aren’t allowed to leave the garden. An electrical defence is also an option for industrial areas that need to be secured. We can help with that as well.” You would think a product with such a long history is fully realised, but even electric fences can be upgraded in these modern times. “We have a research and development department that is currently working on smart-fences that will supply information through an app or by text. That way you know what’s happening around it. It requires a completely new