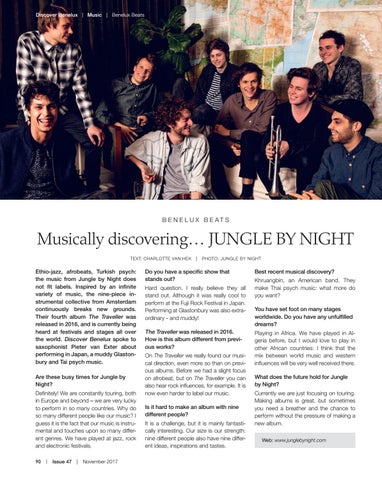 Ethio-jazz, afrobeats, Turkish psych: the music from Jungle by Night does not fit labels. Inspired by an infinite variety of music, the nine-piece instrumental collective from Amsterdam continuously breaks new grounds. Their fourth album The Traveller was released in 2016, and is currently being heard at festivals and stages all over the world. Discover Benelux spoke to saxophonist Pieter van Exter about performing in Japan, a muddy Glastonbury and Tai psych music. Are these busy times for Jungle by Night? Definitely! We are constantly touring, both in Europe and beyond – we are very lucky to perform in so many countries. Why do so many different people like our music? I guess it is the fact that our music is instrumental and touches upon so many different genres. We have played at jazz, rock and electronic festivals. 90  |  Issue 47  |  November 2017

Do you have a specific show that stands out? Hard question. I really believe they all stand out. Although it was really cool to perform at the Fuji Rock Festival in Japan. Performing at Glastonbury was also extraordinary - and muddy!

Best recent musical discovery? Khruangbin, an American band. They make Thai psych music: what more do you want? You have set foot on many stages worldwide. Do you have any unfulfilled dreams? Playing in Africa. We have played in Algeria before, but I would love to play in other African countries: I think that the mix between world music and western influences will be very well received there. What does the future hold for Jungle by Night? Currently we are just focusing on touring. Making albums is great, but sometimes you need a breather and the chance to perform without the pressure of making a new album. Web: www.junglebynight.com