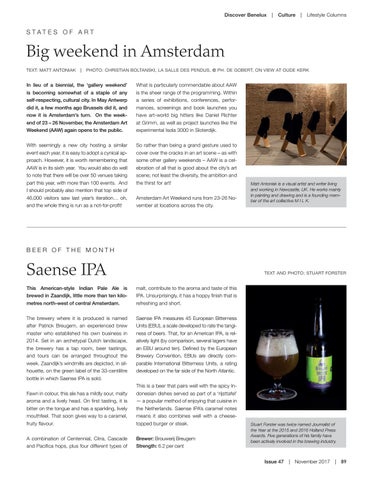 In lieu of a biennial, the ‘gallery weekend’ is becoming somewhat of a staple of any self-respecting, cultural city. In May Antwerp did it, a few months ago Brussels did it, and now it is Amsterdam’s turn. On the weekend of 23 – 26 November, the Amsterdam Art Weekend (AAW) again opens to the public.

What is particularly commendable about AAW is the sheer range of the programming. Within a series of exhibitions, conferences, performances, screenings and book launches you have art-world big hitters like Daniel Richter at Grimm, as well as project launches like the experimental Isola 3000 in Sloterdijk.

With seemingly a new city hosting a similar event each year, it is easy to adopt a cynical approach. However, it is worth remembering that AAW is in its sixth year. You would also do well to note that there will be over 50 venues taking part this year, with more than 100 events. And I should probably also mention that top side of 46,000 visitors saw last year’s iteration… oh, and the whole thing is run as a not-for-profit!

So rather than being a grand gesture used to cover over the cracks in an art scene – as with some other gallery weekends – AAW is a celebration of all that is good about the city’s art scene; not least the diversity, the ambition and the thirst for art! Amsterdam Art Weekend runs from 23-26 November at locations across the city.

malt, contribute to the aroma and taste of this IPA. Unsurprisingly, it has a hoppy finish that is refreshing and short.

The brewery where it is produced is named after Patrick Breugem, an experienced brew master who established his own business in 2014. Set in an archetypal Dutch landscape, the brewery has a tap room, beer tastings, and tours can be arranged throughout the week. Zaandijk’s windmills are depicted, in silhouette, on the green label of the 33-centilitre bottle in which Saense IPA is sold.

Saense IPA measures 45 European Bitterness Units (EBU), a scale developed to rate the tanginess of beers. That, for an American IPA, is relatively light (by comparison, several lagers have an EBU around ten). Defined by the European Brewery Convention, EBUs are directly comparable International Bitterness Units, a rating developed on the far side of the North Atlantic.

Fawn in colour, this ale has a mildly sour, malty aroma and a lively head. On first tasting, it is bitter on the tongue and has a sparkling, lively mouthfeel. That soon gives way to a caramel, fruity flavour.

This is a beer that pairs well with the spicy Indonesian dishes served as part of a ‘rijsttafel’ — a popular method of enjoying that cuisine in the Netherlands. Saense IPA’s caramel notes means it also combines well with a cheesetopped burger or steak.

A combination of Centennial, Citra, Cascade and Pacifica hops, plus four different types of