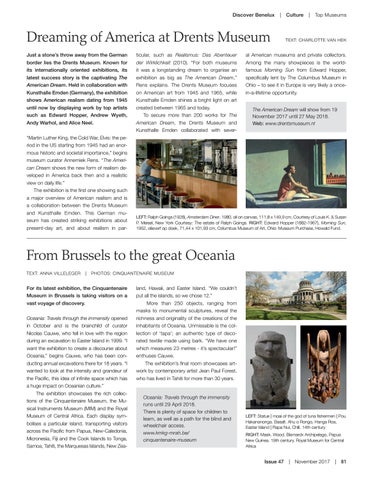 Dreaming of America at Drents Museum Just a stone’s throw away from the German border lies the Drents Museum. Known for its internationally oriented exhibitions, its latest success story is the captivating The American Dream. Held in collaboration with Kunsthalle Emden (Germany), the exhibition shows American realism dating from 1945 until now by displaying work by top artists such as Edward Hopper, Andrew Wyeth, Andy Warhol, and Alice Neel. “Martin Luther King, the Cold War, Elvis: the period in the US starting from 1945 had an enormous historic and societal importance,” begins museum curator Annemiek Rens. “The American Dream shows the new form of realism developed in America back then and a realistic view on daily life.” The exhibition is the first one showing such a major overview of American realism and is a collaboration between the Drents Museum and Kunsthalle Emden. This German museum has created striking exhibitions about present-day art, and about realism in par-

ticular, such as Realismus: Das Abenteuer der Wirklichkeit (2010). “For both museums it was a longstanding dream to organise an exhibition as big as The American Dream,” Rens explains. The Drents Museum focuses on American art from 1945 and 1965, while Kunsthalle Emden shines a bright light on art created between 1965 and today. To secure more than 200 works for The American Dream, the Drents Museum and Kunsthalle Emden collaborated with sever-

al American museums and private collectors. Among the many showpieces is the worldfamous Morning Sun from Edward Hopper, specifically lent by The Columbus Museum in Ohio – to see it in Europe is very likely a oncein-a-lifetime opportunity. The American Dream will show from 19 November 2017 until 27 May 2018. Web: www.drentsmuseum.nl

For its latest exhibition, the Cinquantenaire Museum in Brussels is taking visitors on a vast voyage of discovery. Oceania: Travels through the immensity opened in October and is the brainchild of curator Nicolas Cauwe, who fell in love with the region during an excavation to Easter Island in 1999. “I want the exhibition to create a discourse about Oceania,” begins Cauwe, who has been conducting annual excavations there for 18 years. “I wanted to look at the intensity and grandeur of the Pacific, this idea of infinite space which has a huge impact on Oceanian culture.” The exhibition showcases the rich collections of the Cinquantenaire Museum, the Musical Instruments Museum (MIM) and the Royal Museum of Central Africa. Each display symbolises a particular island, transporting visitors across the Pacific from Papua, New-Caledonia, Micronesia, Fiji and the Cook Islands to Tonga, Samoa, Tahiti, the Marquesas Islands, New Zea-

land, Hawaii, and Easter Island. “We couldn’t put all the islands, so we chose 12.” More than 250 objects, ranging from masks to monumental sculptures, reveal the richness and originality of the creations of the inhabitants of Oceania. Unmissable is the collection of ‘tapa’; an authentic type of decorated textile made using bark. “We have one which measures 23 metres - it’s spectacular!” enthuses Cauwe. The exhibition’s final room showcases artwork by contemporary artist Jean Paul Forest, who has lived in Tahiti for more than 30 years.

Oceania: Travels through the immensity runs until 29 April 2018. There is plenty of space for children to learn, as well as a path for the blind and wheelchair access. www.kmkg-mrah.be/ cinquantenaire-museum