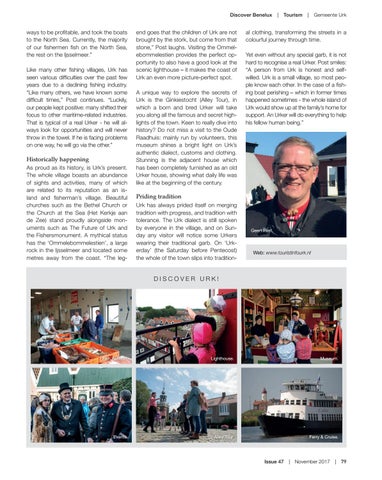 ways to be profitable, and took the boats to the North Sea. Currently, the majority of our fishermen fish on the North Sea, the rest on the Ijsselmeer.” Like many other fishing villages, Urk has seen various difficulties over the past few years due to a declining fishing industry. “Like many others, we have known some difficult times,” Post continues. “Luckily, our people kept positive: many shifted their focus to other maritime-related industries. That is typical of a real Urker - he will always look for opportunities and will never throw in the towel. If he is facing problems on one way, he will go via the other.”

Historically happening As proud as its history, is Urk’s present. The whole village boasts an abundance of sights and activities, many of which are related to its reputation as an island and fisherman’s village. Beautiful churches such as the Bethel Church or the Church at the Sea (Het Kerkje aan de Zee) stand proudly alongside monuments such as The Future of Urk and the Fishersmonument. A mythical status has the ‘Ommelebommelestien’, a large rock in the Ijsselmeer and located some metres away from the coast. “The leg-

end goes that the children of Urk are not brought by the stork, but come from that stone,” Post laughs. Visiting the Ommelebommelestien provides the perfect opportunity to also have a good look at the scenic lighthouse – it makes the coast of Urk an even more picture-perfect spot. A unique way to explore the secrets of Urk is the Ginkiestocht (Alley Tour), in which a born and bred Urker will take you along all the famous and secret highlights of the town. Keen to really dive into history? Do not miss a visit to the Oude Raadhuis: mainly run by volunteers, this museum shines a bright light on Urk’s authentic dialect, customs and clothing. Stunning is the adjacent house which has been completely furnished as an old Urker house, showing what daily life was like at the beginning of the century.

al clothing, transforming the streets in a colourful journey through time. Yet even without any special garb, it is not hard to recognise a real Urker. Post smiles: “A person from Urk is honest and selfwilled. Urk is a small village, so most people know each other. In the case of a fishing boat perishing – which in former times happened sometimes - the whole island of Urk would show up at the family’s home for support. An Urker will do everything to help his fellow human being.”

Priding tradition Urk has always prided itself on merging tradition with progress, and tradition with tolerance. The Urk dialect is still spoken by everyone in the village, and on Sunday any visitor will notice some Urkers wearing their traditional garb. On ‘Urkerday’ (the Saturday before Pentecost) the whole of the town slips into tradition-