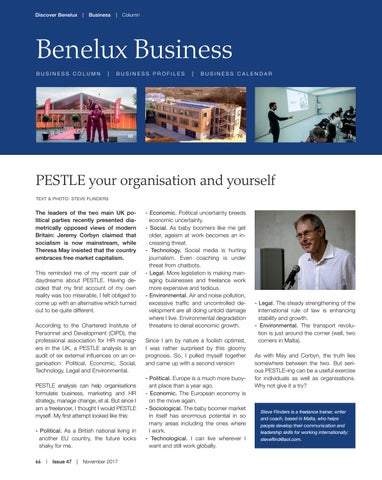 PESTLE your organisation and yourself TEXT & PHOTO: STEVE FLINDERS

The leaders of the two main UK political parties recently presented diametrically opposed views of modern Britain: Jeremy Corbyn claimed that socialism is now mainstream, while Theresa May insisted that the country embraces free market capitalism. This reminded me of my recent pair of daydreams about PESTLE. Having decided that my first account of my own reality was too miserable, I felt obliged to come up with an alternative which turned out to be quite different. According to the Chartered Institute of Personnel and Development (CIPD), the professional association for HR managers in the UK, a PESTLE analysis is an audit of six external influences on an organisation: Political, Economic, Social, Technology, Legal and Environmental. PESTLE analysis can help organisations formulate business, marketing and HR strategy, manage change, et al. But since I am a freelancer, I thought I would PESTLE myself. My first attempt looked like this: - Political. As a British national living in another EU country, the future looks shaky for me. 66  |  Issue 47  |  November 2017

- Economic. Political uncertainty breeds economic uncertainty. - Social. As baby boomers like me get older, ageism at work becomes an increasing threat. - Technology. Social media is hurting journalism. Even coaching is under threat from chatbots. - Legal. More legislation is making managing businesses and freelance work more expensive and tedious. - Environmental. Air and noise pollution, excessive traffic and uncontrolled development are all doing untold damage where I live. Environmental degradation threatens to derail economic growth. Since I am by nature a foolish optimist, I was rather surprised by this gloomy prognosis. So, I pulled myself together and came up with a second version: - Political. Europe is a much more buoyant place than a year ago. - Economic. The European economy is on the move again. - Sociological. The baby boomer market in itself has enormous potential in so many areas including the ones where I work. - Technological. I can live wherever I want and still work globally.

- Legal. The steady strengthening of the international rule of law is enhancing stability and growth. - Environmental. The transport revolution is just around the corner (well, two corners in Malta). As with May and Corbyn, the truth lies somewhere between the two. But serious PESTLE-ing can be a useful exercise for individuals as well as organisations. Why not give it a try?

Steve Flinders is a freelance trainer, writer and coach, based in Malta, who helps people develop their communication and leadership skills for working internationally: steveflind@aol.com.