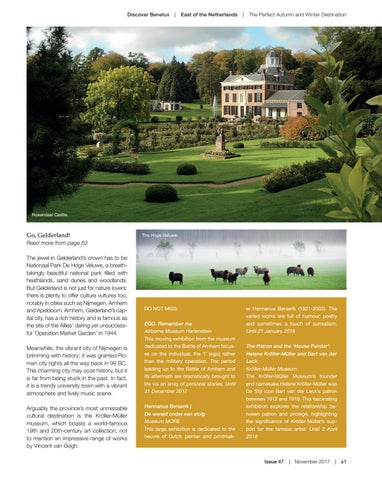 Read more from page 63 The jewel in Gelderland’s crown has to be Nationaal Park De Hoge Veluwe, a breathtakingly beautiful national park filled with heathlands, sand dunes and woodlands. But Gelderland is not just for nature lovers: there is plenty to offer culture vultures too, notably in cities such as Nijmegen, Arnhem and Apeldoorn. Arnhem, Gelderland’s capital city, has a rich history and is famous as the site of the Allies’ daring yet unsuccessful ‘Operation Market Garden’ in 1944. Meanwhile, the vibrant city of Nijmegen is brimming with history: it was granted Roman city rights all the way back in 98 BC. This charming city may ooze history, but it is far from being stuck in the past. In fact, it is a trendy university town with a vibrant atmosphere and lively music scene. Arguably the province’s most unmissable cultural destination is the Kröller-Müller museum, which boasts a world-famous 19th and 20th-century art collection; not to mention an impressive range of works by Vincent van Gogh.

EGO. Remember me Airborne Museum Hartenstein This moving exhibition from the museum dedicated to the Battle of Arnhem focuses on the individual, the ‘I’ (ego) rather than the military operation. The period leading up to the Battle of Arnhem and its aftermath are dramatically brought to life via an array of personal stories. Until 31 December 2017 Hermanus Berserik | De wereld onder een stolp Museum MORE This large exhibition is dedicated to the oeuvre of Dutch painter and printmak-