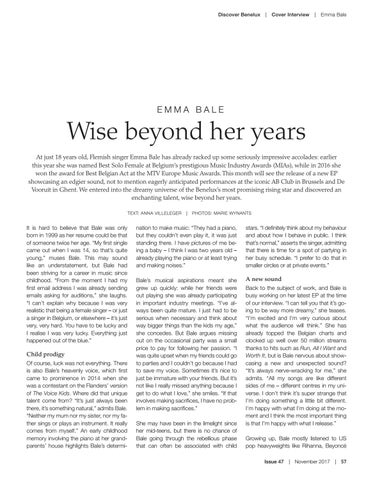 Wise beyond her years At just 18 years old, Flemish singer Emma Bale has already racked up some seriously impressive accolades: earlier this year she was named Best Solo Female at Belgium’s prestigious Music Industry Awards (MIAs), while in 2016 she won the award for Best Belgian Act at the MTV Europe Music Awards. This month will see the release of a new EP showcasing an edgier sound, not to mention eagerly anticipated performances at the iconic AB Club in Brussels and De Vooruit in Ghent. We entered into the dreamy universe of the Benelux’s most promising rising star and discovered an enchanting talent, wise beyond her years. TEXT: ANNA VILLELEGER  |  PHOTOS: MARIE WYNANTS

It is hard to believe that Bale was only born in 1999 as her resume could be that of someone twice her age. “My first single came out when I was 14, so that’s quite young,” muses Bale. This may sound like an understatement, but Bale had been striving for a career in music since childhood. “From the moment I had my first email address I was already sending emails asking for auditions,” she laughs. “I can’t explain why because I was very realistic that being a female singer – or just a singer in Belgium, or elsewhere – it’s just very, very hard. You have to be lucky and I realise I was very lucky. Everything just happened out of the blue.”

Child prodigy Of course, luck was not everything. There is also Bale’s heavenly voice, which first came to prominence in 2014 when she was a contestant on the Flanders’ version of The Voice Kids. Where did that unique talent come from? “It’s just always been there, it’s something natural,” admits Bale. “Neither my mum nor my sister, nor my father sings or plays an instrument. It really comes from myself.” An early childhood memory involving the piano at her grandparents’ house highlights Bale’s determi-

nation to make music: “They had a piano, but they couldn’t even play it, it was just standing there. I have pictures of me being a baby – I think I was two years old – already playing the piano or at least trying and making noises.”

stars. “I definitely think about my behaviour and about how I behave in public. I think that’s normal,” asserts the singer, admitting that there is time for a spot of partying in her busy schedule. “I prefer to do that in smaller circles or at private events.”

Bale’s musical aspirations meant she grew up quickly: while her friends were out playing she was already participating in important industry meetings. “I’ve always been quite mature. I just had to be serious when necessary and think about way bigger things than the kids my age,” she concedes. But Bale argues missing out on the occasional party was a small price to pay for following her passion. “I was quite upset when my friends could go to parties and I couldn’t go because I had to save my voice. Sometimes it’s nice to just be immature with your friends. But it’s not like I really missed anything because I get to do what I love,” she smiles. “If that involves making sacrifices, I have no problem in making sacrifices.”

She may have been in the limelight since her mid-teens, but there is no chance of Bale going through the rebellious phase that can often be associated with child

Back to the subject of work, and Bale is busy working on her latest EP at the time of our interview. “I can tell you that it’s going to be way more dreamy,” she teases. “I’m excited and I’m very curious about what the audience will think.” She has already topped the Belgian charts and clocked up well over 50 million streams thanks to hits such as Run, All I Want and Worth It, but is Bale nervous about showcasing a new and unexpected sound? “It’s always nerve-wracking for me,” she admits. “All my songs are like different sides of me – different centres in my universe. I don’t think it’s super strange that I’m doing something a little bit different. I’m happy with what I’m doing at the moment and I think the most important thing is that I’m happy with what I release.” Growing up, Bale mostly listened to US pop heavyweights like Rihanna, Beyoncé Issue 47  |  November 2017  |  57